The Oireachtas committee hearing submissions on abortion has been told that there would have been many more X cases but for the proximity of the UK.

The legal witnesses, whose submissions were being heard, also rejected suggestions that legislating could mean abortion on demand.

The Oireachtas Joint Committee on Health and Children held its second day of hearings on the abortion issue, focusing on the legal aspects of Government proposals.

The committee was told that the debate had been largely framed as a two-sided argument, but in reality it was more complex.

Barrister Simon Mills, a qualified doctor, said that this had frustrated efforts to move the situation "beyond rhetoric to resolution".

Dr Mills told TDs and Senators that there was now a sizable middle ground of people who held overlapping moderate views on both sides of the debate.

He said a draft bill, which he submitted to the meeting, was an effort to build a law based on that middle ground.

Dr Mills warned that there would have been many more X cases in Ireland were it not for the proximity of the UK and the abortion regime there.

Earlier, Ciara Staunton of the School of Law in NUI Galway urged that any proposed law give statutory effect to the definition of risk to the life of the mother.

She told the committee that the courts had clearly stated that that risk does not have to be imminent or proved beyond a reasonable doubt.

Jennifer Schweppe of the University of Limerick argued that the decision of what constituted real and substantial risk should be left to doctors.

Experts questioned about 'abortion on demand'

Fine Gael TD Mary Mitchell O'Connor asked the witnesses whether relaxing the law could "open the floodgates" to abortion on demand.

Dr Mills insisted no-one to whom he had spoken had identified any loophole in his proposed legislation that would lead to that outcome.

Ms Schweppe said nothing could be guaranteed, but to suggest that doctors would carry out terminations in a more general way diminished the medical profession.

Ms Staunton insisted that the proposed changes in the law were dealing with a very, very narrow issue and if it were drafted correctly there would be no chance of abortion on demand.

Representatives from the Bar Council had been scheduled to take part in the second session, but yesterday they wrote to the committee saying that they would not be able to attend, later insisting that they had never given a formal commitment to do so.

Chair of the Committee Jerry Buttimer told the House that an invitation was issued to the Bar Council before Christmas.

Alan Brady of the Irish Council for Civil Liberties told the committee that abortion is legal in Ireland in certain highly-restricted circumstances and has been for the past 20 years.

Mr Brady said that ICCL strongly endorsed and welcomed the recommendations of the expert group.

He said that this represents an opportunity for Ireland to get out and improve its record on human rights and that it should be proactive rather than being brought before the European Court of Human Rights.

Mr Brady said that there is a concern that the current legal position in Ireland in relation to lethal foetal abnormality is in contravention of Article 3 of the European Convention of Human Rights.

Professor William Binchy of Trinity College Dublin said that, whatever your perspective, the issue is a human rights one.

Prof Binchy said this morning that any major decision on abortion might ultimately have to be made by the Irish people in a referendum.

Speaking on RTÉ's Morning Ireland, he said that what has to be done now, from a legal point of view, is to get the law in line with existing medical practice.

Retired Supreme Court Judge Catherine McGuinness said that her personal views were not relevant. She said she was a lawyer and was there to talk about the law.

She said that suicide created difficulties, and that the Government is legally bound by the X Case. She said that to get rid of suicide as a ground for abortion, a referendum would have to be held.

Elsewhere, the Church of Ireland Gazette has joined Ireland's most senior Catholic bishops in calling for a free vote in the Dáil on abortion legislation.

The editorial in this week's edition said medical professionals need to know more clearly, through legislation, where they stand in relation to abortion.

However, Tánaiste Eamon Gilmore said all Government TDs will be expected to support the Government stance on the issue of abortion.

Speaking on his way into a Cabinet meeting, Mr Gilmore said the Government had made a decision of legislation and regulation and Fine Gael and Labour TDs should support it. 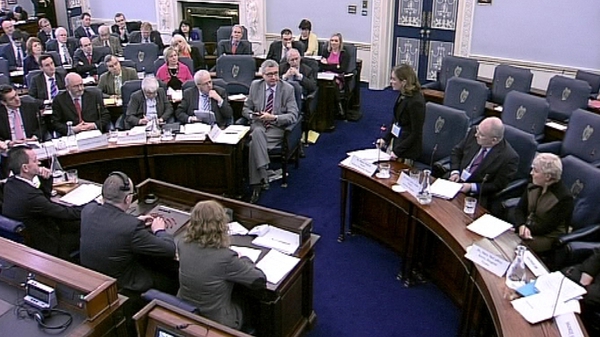 Bar Council will not appear before Oireachtas committee meeting