Taoiseach Enda Kenny has said that the Programme for Government will not be renegotiated, despite any difficulties the Labour Party may be having over the Budget.

He said that he would not comment on speculation that the Social Welfare Bill may not pass through the Seanad.

Earlier, Minister for Public Expenditure and Reform Brendan Howlin said there would be a requirement to renegotiate the Programme for Government at some stage before the current five-year term of office ends.

Mr Howlin said there have been no discussions yet about when that might happen.

He said the current programme was negotiated "in the most difficult of times" and a "huge chunk" of it has been implemented ahead of schedule.

It has not been easy for any elected Labour person to vote for reduced social expenditure, he said.

He added that he understands the difficult personal decisions every member of the parliamentary party has had to make.

Minister Howlin said the vast majority have decided to sustain the Government and recover the economy.

The minister was asked whether Colm Keaveney, who lost the party whip last week after voting against the social welfare measures in the Budget, should resign as party chairman.

Mr Howlin said it was "a matter for Colm himself where he sees his future", and he had no view on the matter.

Meanwhile, Minister for Communications Pat Rabbitte has called on Labour Senators "to stick to the course" when the social welfare provisions in the Budget come before the Seanad.

Mr Rabbitte said: "We've done most of the heavy lifting now, it's behind us, and if parliamentary colleagues hold their nerve there is a better road ahead."

Asked about differences within the Labour Party over the Budget, he said there have been differences of opinion within the party since 1912 and that is the nature of the party.

However, he said that there also has to be discipline and "if discipline breaks down then you are no more than a flag of convenience".

The Senator, who was appointed by the Taoiseach, said the cuts to Respite Care Grants showed a lack of creative decision-making and said she will be voting against it.

Ms O'Donnell said that some Labour Senators have not yet made up their minds how to vote.

She said if the Seanad was serious about surviving it should stand up and send the bill back to the Dáil. 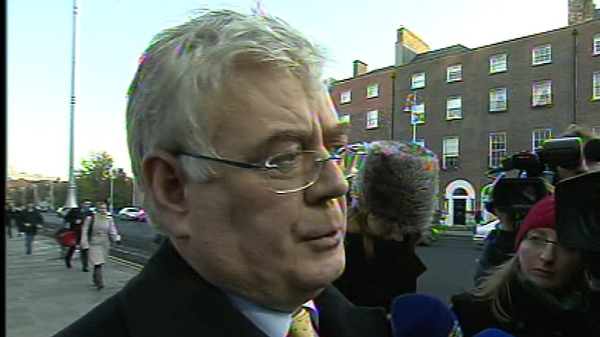