A row has erupted within the Labour parliamentary party on Colm Keaveney's future as party chairman.

Yesterday, Mr Keaveney voted against the Social Welfare Bill prompting his expulsion from the parliamentary party.

He was the only Government TD to vote against the bill, despite disquiet among backbenchers.

Labour Party leader Eamon Gilmore said last night he did not think it was tenable for someone who was not in the parliamentary party to hold senior office in the party.

However, in an interview on Galway Bay FM today, Mr Keaveney said he would not be stepping down.

He said the chairmanship was a gift of the members and not of the leader.

His stance was backed up by Labour MEP Nessa Childers, who said it would be a regressive step for the leadership to try to force Mr Keaveney to step down.

Labour Youth has also backed Mr Keaveney and said “it is vital for party democracy that he continues his work in the role.”

No time for 'political narcissism'

Minister for Communications Pat Rabbitte said he did not see how Mr Keaveney could remain in the role and that now was not a time for "political narcissism".

Speaking on RTÉ’s Morning Ireland, Mr Rabbitte also said there had always been a small "sliver" of opinion that felt the party was more suited to opposition and advocacy than to Government and making hard decisions.

"We can't afford self-indulgence at this time. Any single member of the Labour Parliamentary Party could have gone pirouetting on the plinth (at Leinster House), parading their struggle with their conscience and saying 'watch me now as I agonise about this decision'", he said.

"Any one of them could have done that. Instead they took the hard decision...to bring in a Budget that offers us the prospect of protecting the poor."

Mr Rabbitte said every member of the party knew the challenges and peril facing the country when they voted to go into Government, and they knew that hard decisions would have to be made.

He said there had always been robust differences and a "broad church" of opinion within the party, but he had never witnessed the "calculated venom" that he had seen in the past few weeks from those no longer in the party.

Mr Rabbitte said it was an "open secret" that Labour did have views on taxation of higher earners, but were not able to give effect to those. He insisted that €3.5bn could not be taken out of the economy without touching social welfare.

Mr Kavanagh said leadership was needed at this time and he hoped Mr Keaveney would stay in the party and use his influence to change aspects of Labour Party Government.

He said the party leadership must now seek to ensure that strong steps are taken to ensure that nobody else of such a high profile and with such a commitment to the party principles will ever feel that the right thing to do is to leave the parliamentary party.

Labour is "deeply unhappy" about Social Welfare cuts in the Budget, he said, but said the party strongly supports the role of Government when it comes to getting the country back on the road to economic recovery. 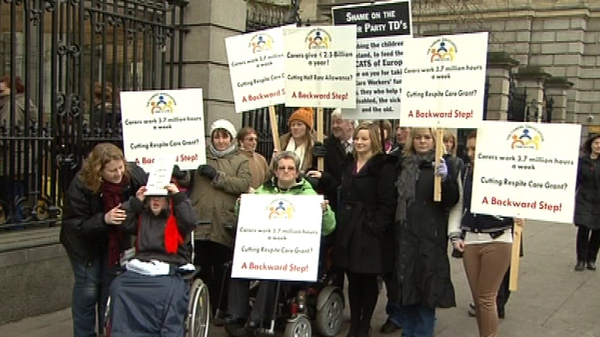