Egypt's liberal and secular opposition said it would back a ‘no’ vote in a referendum on a divisive new constitution promoted by Islamist President Mohamed Mursi, calling off a boycott as long as safeguards are in place for a fair vote.

The army called off unity talks involving rival factions, dealing a blow to efforts to resolve a worsening political crisis over the referendum and rein in street protests that have turned violent.

The latest convulsion in Egypt's transition to democracy was brought on by a decree last month from Mr Mursi in which he awarded himself sweeping powers to push through the new constitution, a necessary prelude to parliamentary elections early next year.

Mr Mursi's move caused huge controversy, dividing the Arab world's most populous state and bringing thousands of pro and anti-government protesters onto the streets in the worst upheaval since the fall of Hosni Mubarak almost two years ago.

The unrest has so far claimed seven lives in clashes between the Islamist Muslim Brotherhood and the opposition.

The army has yet to use force to keep protesters away from the presidential palace, now ringed with tanks, barbed wire and concrete barricades.

Egyptians abroad began voting at embassies in the referendum on the new basic law that Mr Mursi fast-tracked through an Islamist-dominated drafting assembly.

The start of the voting process was a setback for the opposition, which had hoped to delay the plebiscite.

The absence of a boycott could help ease confrontation on the streets and give the charter more legitimacy if it passes.

The main opposition coalition says the draft constitution does not reflect the aspirations of all of Egypt's 83 million people because of provisions which could give Muslim clerics a role in shaping laws.

It wants a new charter with more safeguards for minority rights, including for the 10% of Egyptians who are Christian.

Mr Mursi's supporters say the constitution is needed to continue the transition to democracy. Some deride their opponents as Mubarak-era "remnants" trying to cling to power. 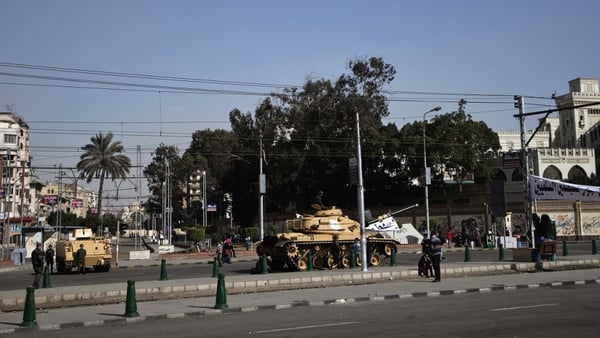