Egypt's army chief has called for talks on national unity to end the country's deepening political crisis after a vital loan from the IMF was delayed and thousands of pro- and anti-government demonstrators took to the streets.

The meeting, scheduled for tomorrow afternoon, was called in response to a destabilising series of protests since President Mohammed Mursi awarded himself sweeping powers on 22 November.

Mr Mursi is trying to push through a new constitution shaped by his Islamist allies in a referendum on Saturday.

"We will not speak about politics nor about the referendum. Tomorrow we will sit together as Egyptians," armed forces chief and Defence Minister Abdel Fattah al-Sisi said at a joint gathering of army and police officials.

An aide said Mr Mursi had supported the call for talks. The Muslim Brotherhood announced it would be there, while the main opposition coalition said it would decide tomorrow morning whether to attend.

Earlier, the finance minister disclosed that a $4.8bn International Monetary Fund loan, a cornerstone of Egypt's economic recovery hopes, would be delayed until next month.

Mumtaz al-Said said the delay was intended to allow time to explain a widely criticised package of economic austerity measures to the Egyptian people.

Yesterday Mr Mursi backed down on planned tax rises, seen as essential for the loan to go ahead, but which the opposition had fiercely criticised.

"Of course the delay will have some economic impact, but we are discussing necessary measures [to address that] during the coming period," Mr Said said.

He added: "I am optimistic ... everything will be well, God willing."

Prime Minister Hisham Kandil said the measures would not hurt the poor. Bread, sugar and rice would not be touched, but prices of cigarettes and cooking oil would go up and fines would be imposed for public littering.

In a bid to rebuild consensus, he said there would be a public consultation about the programme next week.

In Washington, the IMF said Egypt had asked for the loan to be postponed "in light of the unfolding developments on the ground".

The IMF is ready to consult with Egypt on resuming discussions on the stand-by loan, a spokeswoman said.

On the streets of Cairo, tensions ran high after nine people were hurt when gunmen fired at protesters camping in Tahrir Square, according to witnesses and Egyptian media.

The opposition has called for major protests it hopes will force Mr Mursi to postpone the referendum. Thousands gathered outside the presidential palace.

A bigger crowd of flag-waving Islamist Mursi backers, who want the vote to go ahead as planned on Saturday, assembled at a nearby mosque, setting the stage for further street confrontations in a crisis that has divided the nation of 83 million people.

In Egypt's second city of Alexandria, thousands of rival demonstrators gathered at separate venues. Mr Mursi's backers chanted: "The people want implementation of Islamic law", while his opponents shouted: "The people want to bring down the regime". Others cities also witnessed protests. 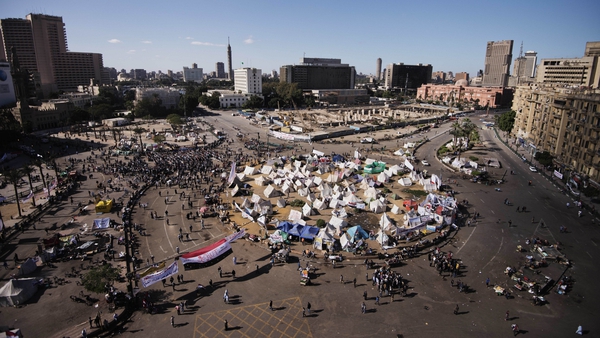 Army in Egypt given right to arrest civilians