Israeli aircraft have bombed Hamas government buildings in Gaza and the "Iron Dome" defence system shot down a Tel Aviv-bound rocket as Israel geared up for a possible ground invasion.

Mr Haniyeh had met with the Egyptian prime minister in the building yesterday.

With Israeli tanks and artillery positioned along the Gaza border and no end in sight to hostilities now in their fourth day, Tunisia's foreign minister travelled to the enclave in a show of Arab solidarity.

In Cairo, a presidential source said Egyptian President Mohamed Mursi would hold four-way talks with the Qatari emir, the prime minister of Turkey and Hamas chief Khaled Meshaal in the Egyptian capital today to discuss the Gaza crisis.

Egypt has been working to reinstate calm between Israel and Hamas after an informal ceasefire brokered by Cairo unravelled over the past few weeks. Mr Meshaal, who lives in exile, has already held a round of talks with Egyptian security officials.

Officials in Gaza said 43 Palestinians, nearly half of them civilians including eight children, had been killed since Israel began its air strikes. Three Israeli civilians were killed by a rocket on Thursday.

Israel unleashed its massive air campaign on Wednesday with the declared goal of deterring Hamas from launching rockets that have plagued its southern communities for years.

The Israeli army said it had zeroed in on a number of government buildings during the night, including Haniyeh's office, the Hamas Interior Ministry and a police compound.

Taher al-Nono, a spokesman for the Hamas government, held a news conference near the rubble of the prime minister's office and pledged: "We will declare victory from here."

Hamas's armed wing claimed responsibility for today’s rocket attack on Tel Aviv, the third against the city since Wednesday. It said it fired an Iranian-designed Fajr-5 at the coastal metropolis, some 70 km north of Gaza.

"Well that wasn't such a big deal," said one woman, who had watched the interception while clinging for protection to the trunk of a baby palm tree on a traffic island.

In the Israeli Mediterranean port of Ashdod, a rocket ripped into several balconies. Police said five people were hurt.

Among those killed in airstrikes on Gaza today were at least four suspected militants riding on motorcycles.

Israel's operation has drawn Western support for what US and European leaders have called Israel's right to self-defence, along with appeals to avoid civilian casualties.

Hamas, shunned by the West over its refusal to recognise Israel, says its cross-border attacks have come in response to Israeli strikes against Palestinian fighters in Gaza.

At a late night session yesterday, Israeli cabinet ministers decided to more than double the current reserve troop quota set for the Gaza offensive to 75,000, political sources said, in a signal Israel was edging closer to an invasion.

Around 16,000 reservists have already been called up.

Asked by reporters whether a ground operation was possible, Major-General Tal Russo, commander of the Israeli forces on the Gaza frontier, said: "Definitely."

A possible move into the densely populated Gaza Strip and the risk of major casualties it brings would be a significant gamble for Prime Minister Benjamin Netanyahu, favourite to win a January national election.

Hamas fighters are no match for the Israeli military. The last Gaza war, involving a three-week long Israeli air blitz and ground invasion over the New Year period of 2008-09, killed over 1,400 Palestinians, mostly civilians. 13 Israelis died.

However the Gaza conflagration has stirred the pot of a Middle East already boiling from two years of Arab revolution and a civil war in Syria that threatens to spread beyond its borders.

"Israel should understand that many things have changed and that lots of water has run in the Arab river," Tunisian Foreign Minister Rafik Abdesslem said as he surveyed the wreckage from a bomb-blast site in central Gaza.

One major change has been the election of an Islamist government in Cairo that is allied with Hamas, potentially narrowing Israel's manoeuvring room in confronting the Palestinian group. Israel and Egypt made peace in 1979.

Mr Netanyahu spoke late yesterday with US President Barack Obama for the second time since the offensive began, the prime minister's office said in a statement.

"(Netanyahu) expressed his deep appreciation for the US position that Israel has a right to defend itself and thanked him for American aid in purchasing Iron Dome batteries," the statement added.

The two leaders have had a testy relationship and have been at odds over how to curb Iran's nuclear programme.

A White House official said today that Mr Obama called Turkish Prime Minister Tayyip Erdogan to discuss how the two countries could help bring an end to the Gaza conflict.

In Berlin, a spokesman for German Chancellor Angela Merkel said she had spoken to Mr Netanyahu and Egypt's Mr Mursi, stressing to the Israeli leader that Israel had a right to self-defence and that a ceasefire must be agreed as soon as possible to avoid more bloodshed.

UN Secretary-General Ban Ki-moon is expected to visit Israel and Egypt next week to push for an end to the fighting in Gaza, UN diplomats said yesterday.

The Israeli military said 492 rockets fired from Gaza have hit Israel since the operation began. Iron Dome intercepted another 245.

In Jerusalem, targeted by a Palestinian rocket yesterday for the first time in 42 years, there was little outward sign on the Jewish Sabbath that the attack had any impact on the usually placid pace of life in the holy city.

Some families in Gaza have abandoned their homes - some of them damaged and others situated near potential Israeli targets - and packed into the houses of friends and relatives. 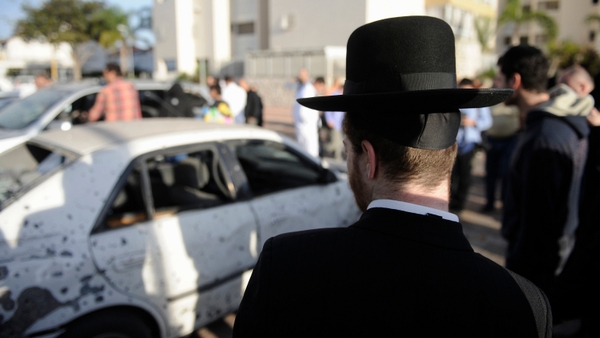