The Israeli army has said it was closing to civilian traffic three roads that lead to, or border the Gaza Strip, in an indication of a probable military build-up in the area.

Shortly before, political sources said Defence Minister Ehud Barak was seeking government approval to mobilise up to 75,000 reserve troops for Israel's Gaza campaign, in a sign of preparations for a possible ground offensive.

Palestinian militants have fired a rocket aimed at Jerusalem, setting off air raid sirens throughout the city.

It opens a new front in three days of fierce fighting between Israel and armed groups in Gaza.

The attack marks a major escalation by Gaza militants, both for its symbolism and its distance from the Palestinian territory.

Located roughly 75km away from the Gaza border, Jerusalem had been thought to be beyond the range of Gaza rocket squads.

Abu Obeida, spokesman for the Hamas militant wing, said the group had fired a long-range, homemade "M-75" rocket at Jerusalem.

The Israeli campaign has been limited to airstrikes so far, but military officials say they are considering expanding it to a ground campaign.

Lt Col Avital Leibovich, a military spokeswoman, said the military called 16,000 reservists to duty today as it gears up for a possible ground offensive.

She said the army had authority to draft an additional 14,000 soldiers. 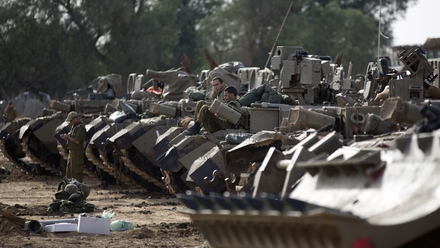 Israeli police spokesman Micky Rosenfeld said the rocket landed in an open area near Gush Ezion, a collection of Jewish settlements in the West Bank southeast of the city.

Gush Ezion is close to the Palestinian city of Bethlehem and just a few kilometers from the revered Al-Aqsa Mosque in Jerusalem's Old City, one of Islam's holiest sites.

Jews call the compound the Temple Mount because of the biblical Jewish temples that once stood there.

Hundreds of thousands of Palestinians live in Jerusalem and nearby areas of the West Bank.

Militants already have fired rockets into the southern outskirts of Tel Aviv, another unprecedented achievement, yesterday.

The rocket attacks have not hurt anyone in the bustling metropolis, but have caused panic and jitters.

Just a few years ago, Palestinian rockets were limited to crude, homemade devices manufactured in Gaza.

But in recent years, Hamas and other armed groups have smuggled in sophisticated, longer-range rockets from Iran and Libya, which has been flush with weapons since Muammar Gaddafi was ousted last year.

Most of the rockets do not have guided systems, limiting their accuracy, though Israeli officials believe the militants may have a small number of guided missiles that have not yet been deployed.

The strike occurred on the third day of an Israeli offensive in Gaza meant to halt rocket fire from the crowded seaside strip. 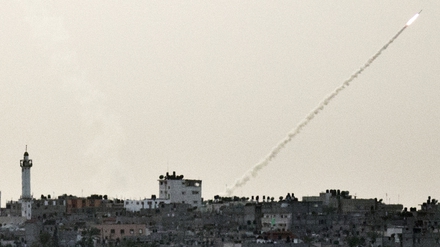 But militants have continued to rain rockets across Israel.

Along the border today, tanks, armoured vehicles and military bulldozers were parked in neat rows.

Soldiers milled about, while buses filled with soldiers moved in the area.

Hamas militants have vowed to resist the Israeli offensive.

They received a boost of solidarity today with a visit by Egyptian Prime Minister Hesham Kandil, who called on Israel to end its operation.

In all, 23 Palestinians have been killed, including 11 civilians, according to Gaza health officials, and 250 people wounded.

Three Israelis were killed when a rocket hit an apartment building in southern Israel.