US President Barack Obama will return to active campaigning in the presidential election tomorrow with a trip to the battleground state of Nevada.

Both had put campaigning on hold for a second day yesterday following the devastation caused by Sandy on the east coast.

The storm dampened an unprecedented drive to encourage early voting and raised questions whether some polling stations will be ready to open on election day on 6 November.

Polls show the contest is virtually deadlocked in several key states, with just six days to go to the election.

Mr Obama faces political danger if the government fails to respond well to the crisis, as was the case with his predecessor George W Bush's botched handling of Hurricane Katrina in 2005.

Today, the president is visiting New Jersey, which along with New York City bore the brunt of the storm, and he will go before cameras with New Jersey's Republican governor.

Chris Christie is one of Mr Romney's most prominent supporters, and a frequent critic of Mr Obama, but he has praised the president's handling of the response to superstorm Sandy.

Yesterday, Mr Romney changed the focus of an Ohio election event to emphasise relief for victims.

"It's part of the American spirit, the American way, to give to people in need," Mr Romney told supporters in Kettering, Ohio, before they lined up to hand him bags of canned food for storm victims.

Both candidates have been forced to walk a delicate line, trying to avoid appearing insensitive or crassly political after Sandy inflicted heavy property damage, killed at least 30 people and left millions on the eastern seaboard without power.

National polls show Mr Obama and Mr Romney in a dead heat, although Mr Obama retains a slight advantage in the key swing states that will determine who gathers the 270 electoral votes needed to win.

Mr Obama leads Mr Romney by 47% to 46%, according to a national Reuters/Ipsos daily tracking poll, but 53% of all registered voters predicted Mr Obama would win the election. 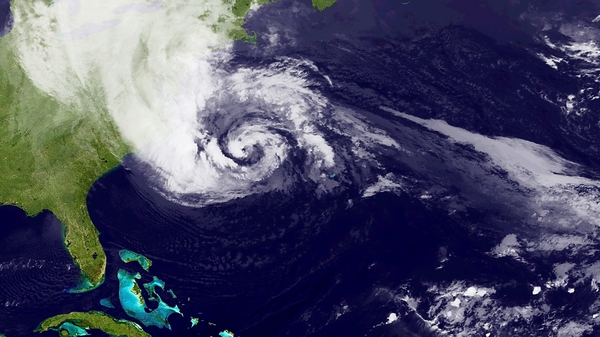 Hurricane Sandy expected to make landfall in US