Storm surges and flooding are forecast along the eastern coast of the United States and its thought up to 50 million people could be affected.

Fierce winds and flooding are expected along hundreds of miles of Atlantic coast and heavy snows are forecast farther inland at higher elevations when the centre of the storm moves ashore this evening near Atlantic City, New Jersey.

US stock markets were closed for the first time since the attacks of 11 September, 2001, and will remain shut tomorrow.

The government in Washington was closed and school was cancelled up and down the east coast.

Nearly 700,000 customers are without power and millions more could lose electricity. One disaster forecasting company predicted economic losses could ultimately reach $20bn, only half of it insured.

"This is going to be a big and powerful storm and all across the Eastern Seaboard I think everybody is taking the appropriate preparations," President Barack Obama said at the White House.

State governors from Virginia to Massachusetts warned of the acute danger from the storm for the 60 million residents in its path. Ten states have declared a state of emergency.

"There will undoubtedly be some deaths that are caused by the intensity of this storm, by the floods, by the tidal surge, by the waves.

Forecasters said Sandy could be the largest storm to hit the mainland in US history.

Off North Carolina, the US Coast Guard rescued 14 of the 16 crew members who abandoned the replica tall ship HMS Bounty, using helicopters to lift them from life rafts.

In New York, a crane atop a building on 57th Street in Manhattan had partially collapsed, leaving it dangling high above the street. Police said they were closing the area to pedestrians.

The storm interrupted the presidential campaign with eight days to go before the election.

President Obama cancelled a campaign event in Florida so he could return to Washington and monitor the government response to the storm. Republican presidential candidate Mitt Romney cancelled stops tonight and tomorrow.

Sandy picked up speed as it raced northwest toward the US coast at 45km/h this afternoon, with top sustained winds at 150km/h the US National Hurricane Center said.

At 6pm Irish time, the centre of the storm was about 180km/h southeast of Atlantic City, New Jersey, or 280km south-southeast of New York City.

Hurricane-force winds were already being recorded on the New Jersey coast.

"The centre of Sandy is expected to make landfall along or just south of the southern New Jersey coast by early evening," NHC forecasters said, adding they expected little change in strength before then.

Forecasters said Sandy was a rare, hybrid "super storm" created by an Arctic jet stream wrapping itself around a tropical storm.

The combination of those two storms would have been bad enough, but meteorologists said there was a third storm at play - a system coming down from Canada that would effectively trap the hurricane-nor'easter combo and hold it in place.

Moreover, the storm was coming ashore at high tide, which was pulled even higher by a full moon.

While Sandy does not have the same force as Hurricane Katrina, which devastated New Orleans in 2005, it has been gathering strength. It killed 66 people in the Caribbean last week before pounding US coastal areas as it moved north.

Aer Lingus says it plans to operate flights between Dublin and New York tomorrow, but delays can be expected.

The airline says intending passengers will be updated via text message and can get information online.

Aer Lingus flights to and from Chicago, Orlando and Boston will operate as scheduled.

Are you in the path of Hurricane Sandy or have you already been affected by it? Send your pictures and videos to yourphotos@rte.ie 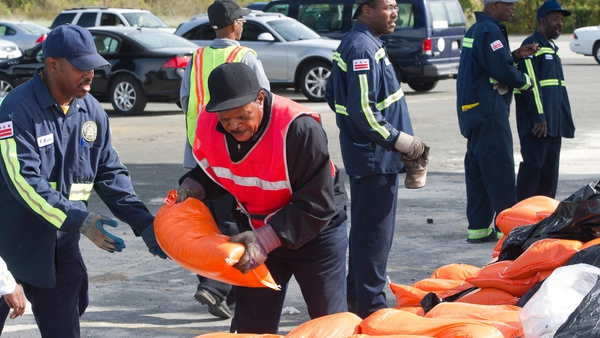 Evacuations, shutdowns on US East Coast before storm