Palestinians militants have fired dozens of rockets into Israel from Gaza and an Israeli air strike killed a militant, a day after the Emir of Qatar made a rare visit to the enclave's Hamas leadership.

Hamas claimed responsibility for some of the rocket and mortar bomb attacks, prompting some Israelis to wonder whether it had been emboldened by the Qatari visit that broke the Islamist group's diplomatic isolation.

In recent months, Hamas has largely held its fire when other militant factions have launched cross-border rocket attacks.

The sudden upsurge in violence stoked fears that the hostilities could escalate further.

Hamas accused Israel of stepping up air strikes in the Gaza Strip, a move it said was meant to convey Israeli anger over Sheikh Hamad bin Khalifa al-Thani's visit, and pledged to "continue to hold a gun ... until Palestine is liberated".

Israel said it was "astounding" that Qatar, a US-allied Gulf state, would take sides in the Palestinian dispute and endorse Hamas, branded by the West as a terrorist group.

Hamas seized the Gaza Strip in 2007 from fighters loyal to the Fatah faction of Western-backed Palestinian President Mahmoud Abbas.

Some analysts saw the Qatari ruler's trip, the first by any national leader to Gaza since Hamas took over, as an attempt to build bridges between the group and the West and coax it into the peace camp amid Arab turmoil across the Middle East.

A Palestinian official said Egypt was trying to mediate a truce.

Israeli officials had no immediate comment. Previous rounds of cross-border attacks have usually fizzled out in days, with both Israel and Hamas seemingly aware of the risks of ramping up the low-intensity conflict.

Israel's three-week-long invasion of the Gaza Strip, launched in 2008 with the declared aim of curbing rocket launches, drew international criticism over a heavy Palestinian casualty toll.

Though hostile to Israel, Hamas has mostly sought to avoid direct clashes as it shores up its rule in the face of more radical challengers and seeks potential allies abroad.

In a second day of violence, a Hamas militant was killed today in an air strike, which Israel said was intended to stop rocket launches.

Yesterday, Israel killed three Hamas men, saying they had either launched attacks or were about to do so.

In southern Israel, three agricultural workers were wounded when a Palestinian rocket exploded near them.

An Israeli military spokeswoman said 79 projectiles had been fired at Israel and that the Iron Dome system had intercepted eight of them. She said several homes had been damaged by Palestinian rockets.

"We did not choose this escalation, nor did we initiate it, but if it continues, we are prepared for a much wider and deeper operation," he said, pledging to press on with "targeted attacks" against militants preparing to fire rockets.

Israel kept schools shut in communities near the fenced Gaza boundary and residents were urged to remain indoors.

Hamas has refused to renounce violence or recognise Israel's right to exist, and is ostracised by the Quartet of Middle East mediators comprising the United States, United Nations, European Union and Russia.

However, Hamas has said it would accept a truce with Israel in return for a state in the occupied West Bank and Gaza Strip. 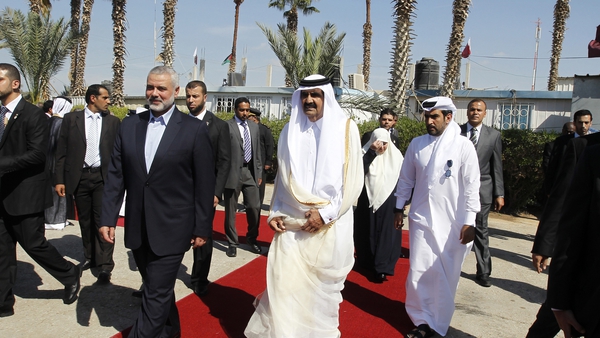