The European Court of Justice in Luxembourg is considering legal argument regarding the lawfulness of the EU's permanent bailout fund, the European Stability Mechanism.

It stems from a case taken by Donegal South-West TD Thomas Pringle.

The Independent TD argued in the Irish courts that the ESM treaty breached both the Irish Constitution and European Union law.

The ESM was characterised at the European Court of Justice in Luxembourg as undermining EU law.

The comments were made at the EU's highest court by John Rogers, Senior Counsel, who is representing Mr Pringle.

Mr Rogers argued: "In trying to defend the compatibility of the ESM with the EU treaties, the intervening member states and institutions have had to engage in mischaracterisation and distortion in the confusion of form and substance and in legal and conceptual contradictions."

The European Court of Justice, which has the power to strike down the ESM as it is currently constituted, is considering the case, after a series of questions were referred to Luxembourg by the Irish Supreme Court.

All 27 judges of the ECJ are participating in the hearing - the first time this has happened in a case referred by a national court.

In his presentation this morning, Mr Rogers zoned in on the fact that the ESM can exist as an independent entity, outside of EU law.

He said: "We are concerned that a body outside the union and not subject to union law could take measures in connection with the union and dictate conditions that will be imposed on member states in matters so fundamental and integral to the union as its economy and its currency."

However Mr Rogers' view was rejected by both other Member States and EU institutions.

Michael Cush SC for Ireland said the ESM amendments were "fully compatible with the treaties".

He countered that the ESM "will not affect the union's exclusive competence regarding monetary policy for the euro area nor will it increase the limited competence that it has in respect of the coordination of the member states' economic policy."

Thomas Henze, a lawyer for the German government, said there was no indication of any infringement of EU law.

He countered Mr Rogers' assertion that the ESM should not have been ratified when the relevant treaty, the Fiscal Treaty, did not come into force until January.

Mr Henze said: "The current financial crisis has led to the unforeseeable situation where some member states have been pushed to the brink of insolvency.

"In such cases other member states can provide financial support to these countries, otherwise it would trigger a chain reaction which would bring about the collapse of the euro area."

After three hours and 30 minutes of questioning, the ECJ Judges asked legal representatives to stand over their statements.

Most of the questioning of the bench was focused on the oral statements from the European Commission and the European Counsel, although Mr Rogers was called to clarify and justify his arguments on several occasions.

At 4pm local time, the President of the Court declared that the judges were now "relatively well informed" and proceedings were adjourned.

The case is being dealt with under accelerated or fast-track procedure and a ruling is expected before the end of the year. 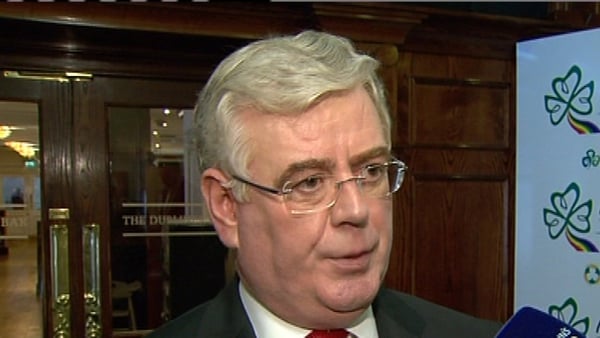