Voters say US President Barack Obama outperformed Republican Mitt Romney in last night's debate, but their opinions of each candidate did not shift significantly.

According to a Reuters/Ipsos poll released today, 47% of registered voters surveyed in the online poll judged Mr Obama the winner, while 31% believed Mr Romney won.

But neither candidate's favourability ratings shifted in the wake of the debate, the last of three televised matchups before the 6 November election.

Likewise, voter assessments of the candidates on a range of issues from the economy to foreign policy did not change by a statistically significant margin.

Mr Obama's favourability rating ticked up by one percentage point to 57%, a statistically insignificant change.

Mr Romney's favourability likewise inched up one point, to 54%.

The full impact of the debate on the race will not show up in opinion polls for several more days, but it is unlikely that it will give either candidate a big enough boost to break their statistical tie, Ipsos pollster Julia Clark said.

"By this point in the election cycle a lot of people have formed a more complete view of each candidate," Ms Clark said.

The accuracy of Reuters/Ipsos online polls are measured using a credibility interval.

The survey of 515 registered voters, conducted today following the debate, has a credibility interval of 4.9 percentage points.

The debate did appear to move the needle with some voters, but not in a way that clearly benefited either candidate.

The same pattern held for Mr Romney: 22% viewed him in a more positive light, 21% viewed him more negatively and 48% said their opinion did not change.

A separate Reuters/Ipsos daily tracking poll has shown Mr Obama and Mr Romney to be within three percentage points of each other ever since the first debate on 3 October.

As of this evening, Mr Obama led by one percentage point, well within the poll's credibility interval.

The debate was the last chance for the candidates to appeal to millions of voters watching on television, and Mr Obama was the aggressor from start to finish.

He criticised Mr Romney for lacking ideas on the Middle East, mocked his calls for more ships in the US military and accused his Republican rival of wanting to bring the United States back to a long-abandoned Cold War stance.

"You mentioned the Navy, for example, and that we have fewer ships than we did in 1916," Mr Obama said.

"Well, Governor, we also have fewer horses and bayonets, because the nature of our military's changed.

"We have these things called aircraft carriers, where planes land on them. We have these ships that go under water, nuclear submarines," he said.

"The question is not a game of Battleship, where we're counting ships," he said.

He also said Mr Romney was seeking to turn back the clock by once declaring Russia the top "geopolitical foe" of the US.

Seated at a table with moderator Bob Schieffer, Mr Obama said Mr Romney was trying to return US foreign policy to the 1980s and that the decade was "now calling to ask for their foreign policy back because, you know, the Cold War's been over for 20 years".

Mr Romney said Mr Obama's policies toward the Middle East and North Africa were not stopping a resurgence of the threat from al-Qaeda in the region.

Mr Romney, wanting to make no mistakes that could blunt his recent rise in the polls, did not take the bait on some occasions when attacked, which may have led viewers to declare Mr Obama the winner.

Although Mr Romney lacks foreign policy experience, his aides said they believed their man's performance allowed him to pass the "commander-in-chief" test to show Americans he is knowledgeable about foreign affairs and enable them to envision him in the Oval Office.

The former Massachusetts governor, whose central theme throughout the campaign has been a promise to rebuild the weak US economy, frequently turned the discussion back to economic matters, saying US national security depended on a strong economy. 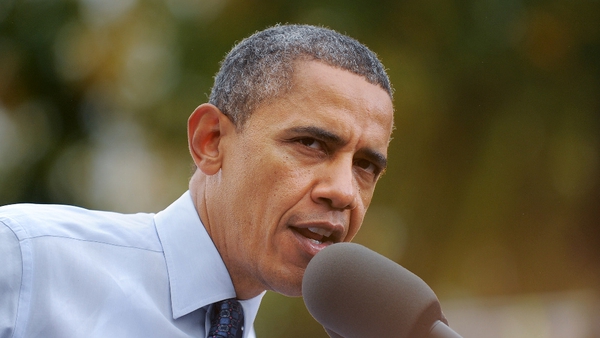