He promised that France would recognise it, accelerating the departure of President Bashar al-Assad's regime as the violence escalates in the Arab country.

Mr Hollande's appeal to the opposition underscores a belief in many diplomatic circles that a credible alternative to Mr Assad's regime must take shape first in order to expedite the Syrian leader's exit - an outcome that France, the US and many other Western powers have sought for months.

Syria's opposition remains badly fragmented and it is far from clear whether such a provisional government could be formed anytime soon.

But Mr Hollande's statement, believed to be the first of its kind, appeared aimed to give an impetus to the creation of such a government in part because there is no international mandate for stronger action.

Many Western nations and Arab countries have called for Mr Assad to leave power, but none has gone so far as to formally recognise the opposition.

"France asks the Syrian opposition to form a provisional government - inclusive and representative - that can become the legitimate representative of the new Syria," Mr Hollande said in a speech to France's corps of ambassadors.

"We are including our Arab partners to accelerate this step," he said at the presidential palace, without elaborating.

"France will recognise the provisional government of Syria once it is formed."

In Washington, American officials said the French call for a Syrian provisional government was not coordinated with anyone else, and that the US would not echo the statement anytime soon.

The officials called it premature to speak about a provisional government when Syria's fractured opposition has not even agreed yet on a transition plan.

The US officials spoke on condition of anonymity because they weren't authorised to speak publicly on the matter.

He said that any use of chemical weapons to repress Syria's people "would provide a legitimate reason for direct intervention by the international community".

But France sees no clear indication that Mr Assad's forces are taking any steps to employ chemical weapons, a French official said on condition of anonymity because of the sensitivity of the matter.

France also has taken steps to support the creation of "free zones" for the protection of displaced people inside Syria - notably along the lines of a buffer zone idea floated by Turkey, Mr Hollande said.

Russia and China have blocked UN sanctions against Syria by using their vetoes on the UN Security Council.

Mr Hollande took issue with that, saying Moscow's and Beijing's "attitude weakens our ability to carry out the mandate conferred on us by the UN charter".

Syria's opposition has been plagued by divisions and infighting since the start of the uprising last year, and forming a transitional government is fraught with difficulties.

Abdelbaset Sieda, the leader of main umbrella opposition group the Syrian National Council, said recently the group was planning and consulting for a transitional government.

But several other opposition groups are known to be making similar plans, including a new opposition alliance headed by veteran opposition figure Haitham Maleh.

Earlier, Syrian rebels claimed that they shot down an army helicopter this morning while it was bombarding the Damascus neighbourhood of Jobar.

Syrian state television reported that the helicopter had crashed, as heavy fighting broke out in the district between rebels and troops loyal to President Assad.

Video footage from activists showed the burning helicopter falling to the ground in a trail of smoke.

The helicopter crashed in a narrow residential street in the northeastern neighbourhood of Qaboun, which is on the outskirts of the capital.

Elsewhere, Minister of State for Trade and Development Joe Costello has said 3,600 people arrived overnight in a Jordanian refugee camp for families fleeing the conflict in Syria.

He is assessing how Irish aid is assisting humanitarian relief efforts for Syrian refugees.

Mr Costello said conditions in the camp were arduous.

He said: "The ground is extremely dusty and very uncomfortable for people. All water has to be brought into the camp in trucks. The heat is pretty much intolerable.

"So the conditions are very, very difficult for the people who've come in, but their lives are very safe here." 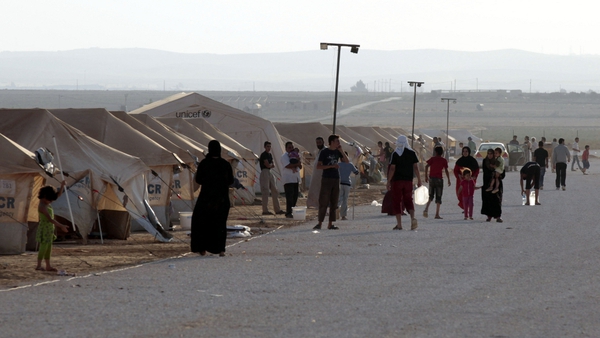 Over 200,000 Syrians have fled to neighbouring countries - United Nations