Nevin won all three rounds at the ExCeL Arena, taking the first 5-3, the second 7-6 and the final round 7-5.

The Mullingar boxer will fight Britain's Luke Campbell in the final tomorrow night at 8.45pm.

Around 1,500 people crowded into the Market Square in Mullingar this afternoon to watch Nevin’s fight on a big screen.

There was a carnival atmosphere as some businesses closed up for a couple of hours to watch the fight.

The big screen will be moved to the car park of the Harbour Place shopping centre for tomorrow night's final.

A number of family members of John Joe Nevin said that they were refused entry to some licensed premises in Mullingar today to watch his semi-final fight.

They said they were extremely upset and felt they were discriminated against on a day that brought such joy to the town.

They are hoping the matter will be resolved in time for John Joe's final fight tomorrow.

Barnes wins a bronze medal, repeating his achievement at the Beijing Olympics in 2008.

Conlan was left with too much to do in the final round, and Carranza won it 10-4.

The women's 4 x 400m relay team came sixth and did not progress in their heat at the Olympic Stadium.

The Polish-born competitor was fourth in his semi-final.

Meanwhile, a triumphant homecoming is being organised for Katie Taylor.

Thousands are expected to turn out to welcome home the 26-year-old boxing champion who overcame Russia's Sofya Ochigava 10-8 in the women's lightweight final yesterday.

Taylor's brother Peter said her family always believed in her.

He said: "All our of destinies seemed to be wrapped up in this as a family. We always knew that there was something special about Katie when she was younger.

Dublin Airport is putting plans in place to deal with the thousands of people expected to turn up to welcome Team Ireland home.

With five medals guaranteed, it will be the most successful Irish team since 1956.

President Michael D Higgins has invited members of the Olympic team to a reception at Áras an Uachtaráin next month.

No date has been set for the reception, but it is understood that the Olympic Council of Ireland has already accepted the invitation. 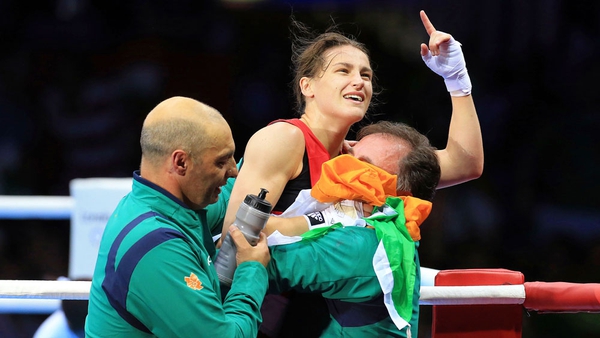