The 26-year-old from Bray, Co Wicklow, came from behind to win the female boxing lightweight final at the ExCeL Arena in London.

The fight was tied at 2-2 after the first round, and Taylor trailed 4-3 after the second.

It is the first Olympic Games in which women competed inside the boxing ring and her fight attracted intense national and international attention.

Taylor kissed her Olympic gold when it was presented to her in front of a capacity crowd.

Speaking of her victory, she said she had dreamt of this moment so many times before.

Minister of State Michael Ring, who was at the venue, said that the ''roof almost lifted'' and that the ''atmosphere was simply electric.''

President Michael D Higgins has described the victory as magnificent and said it had lifted the spirit of the nation.

Many work-places around the country closed early for the bout, which began shortly before 5pm.

Big screens were in place in her home town where thousands of fans watched her box her way to victory and a gold medal.

Taoiseach Enda Kenny said Taylor was ''a force of nature whose pioneering spirit and boxing brilliance have seen her realise her personal dream of winning Olympic gold.''

He will face Zou Shiming from China in the semi-final tomorrow. Zou beat Barnes at the same stage in Beijing in 2008.

Barnes, from the Holy Family club in Belfast, is the first Irishman to win medals at two consecutive Olympics since Dr Pat O’Callaghan in 1928 and 1932.

John Joe Nevin and Michael Conlan will also fight for a place in the final of their respective weight divisions tomorrow.

Cian O'Connor collected Ireland’s first medal of the games yesterday when he won bronze in the individual showjumping. 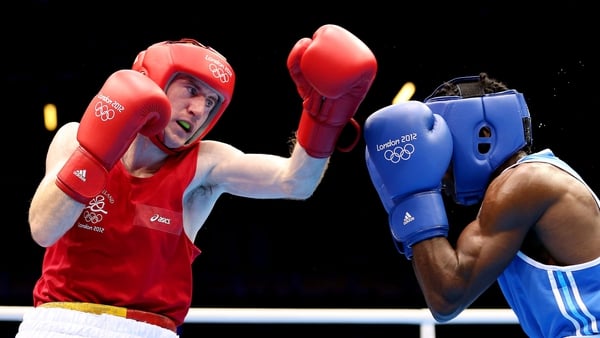