The Information Commissioner has welcomed Government proposals to extend Freedom of Information legislation to the gardaí, NAMA and other public bodies not previously covered.

However, Emily O'Reilly said the “devil would be in the detail” when the legislation is published.

Ms O'Reilly also commended Minister for Public Expenditure and Reform Brendan Howlin for winning the “battle” against some Cabinet colleagues to push through the proposal.

The Information Commissioner said, "until we see the legislation, we won't know just how deep the penetration goes in relation to accountability and transparency."

She continued, "I think that until people start making requests for records, and we see what the response is, we really won't know how far this goes."

Ms O'Reilly said, “I think (Minister Howlin) has got over the first hurdle. He has obviously faced quite a significant amount of opposition from colleagues and he's got through that."

On the issue of NAMA being reluctant to hand over documents because of commercial sensitivity, Ms O'Reilly said it was never the intention of the FOI Act to do harm, but to do good.

She said: "Where there is commercial sensitivity, and there's no public interest in releasing those documents, they're not released. Those are the sort of decisions I've been making over the last nine years."

Elsewhere, Minister for Public Expenditure and Reform, Brendan Howlin, has denied that the Government has done a U-turn regarding fees for Freedom of Information requests.

Under the Government's plans to expand the Act an initial fee of €15 will still have to be submitted with an FOI request.

The cost of an internal appeal will drop from €75 to €30, while the cost of an appeal to the Information Commissioner will go down from €150 to €50.

However, in the Programme For Government it was stated that the parties would "restore the Freedom of Information Act to what it was before it was underminded by the outgoing Government and extent its remit to other public bodies."

The introduction of fees was part of that review introduced by the Fianna Fáil led administration in 2003.

At the time both Fine Gael and Labour opposed the introduction of fees.

In a statement to RTÉ News this evening a spokesperson for the Minister said the fees were "intended to provide some incentive for requesters to make targeted and focused requests."

70% of FOI requests are for personal information and so exempt from fees.

Last year a total of €87,439 was received in FOI fees - for applications, appeals and for search and retrieval costs.

This, the spokesperson said equated to an average charge of about €23 per request while the cost of processing a request was around €640.

Meanwhile, a review of the British Freedom of Information Act was published today. Carried out by the cross party House of Commons Justice Committee it rejected the idea of introducing fees for FOI requests.

The report concludes that while FOI imposes costs, it also creates savings.

Savings arise when the inappropriate use of public funds is uncovered - or where fear of disclosure prevents the waste of public money. 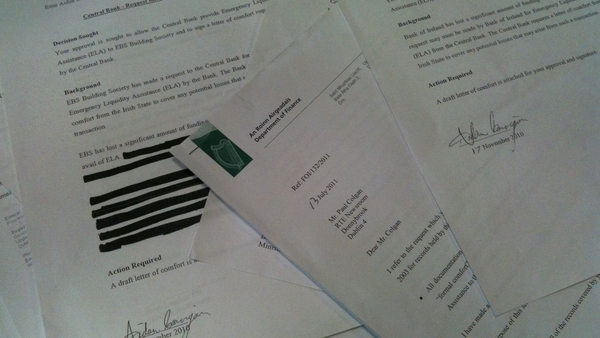 FOI legislation to expand to include gardaí and the Central Bank