Pope Benedict has said the legacy of Irish Catholicism has been shaken by the clerical sexual abuse of children.

In a pre-recorded address to the 50th International Eucharistic Congress in Croke Park, the Pope praised the church in Ireland for its heroic missionaries and its mighty contribution to the good of the world.

But he said this joyful legacy had been shaken in an appalling way by the abuse of children by priests, brothers and nuns.

Earlier, in his homily, the Papal Legate told the capacity congregation that the Lord heals the Church's wounds.

"Let us rejoice and be glad", Cardinal Marc Ouellet said. "We can rely on the Lord for a new beginning."

He said that God sustains the Church when it experiences limitations and failures and the Lord heals the Church's wounds and strengthens its members' love.

Over 1,000 priests registered for the Congress are concelebrating the mass.

In his address, Pope Benedict said much remains to be done on the path to liturgical renewal. 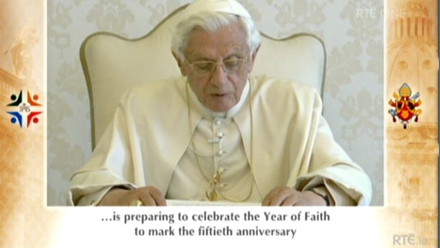 He said Ireland had been shaped by the mass at the deepest level for centuries and told the congregation that they were heirs to a Church that has been a mighty force for good in the world.

However, he said that force has recently been shaken in an appalling way by the revelation of the sins committed by priests against people entrusted to their care.

He said they abused people and undermined the credibility of the Church's message.

He said: "Instead of showing them the path towards Christ, towards God, instead of bearing witness to his goodness, they abused people and undermined the credibility of the Church's message.

"How are we to explain the fact that people who regularly received the Lord's body and confessed their sins in the sacrament of Penance have offended in this way? It remains a mystery.

"Yet evidently, their Christianity was no longer nourished by joyful encounter with Jesus Christ: it had become merely a matter of habit."

He said the Congress had continued the Church's drive to overcome this form of Christianity.

The Pope also announced that the 2016 International Eucharistic Congress will be held in Cebu in the Philippines.

He received a standing ovation after his message. 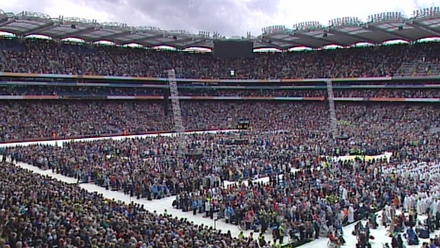 In his closing greeting, Archbishop of Dublin Diarmuid Martin, also prayed for the victims of the abuse.

"We have kept in our prayers and in our hearts all those who suffered criminal abuse within the community of Christ's church and all those who feel in any way alienated from the church and who have not experienced in our church the love of Jesus Christ," he added.

He raised a very loud cheer when he thanked the 1,700 volunteers who had helped make the Congress a success "way beyond the expectations" of its organising committee.

President Michael D Higgins and the Taoiseach Enda Kenny were among the congregation in Croke Park.

Earlier, there was a “Gathering Ceremony” featuring soprano Celine Byrne, composer Fr Liam Lawton, the Dublin Deaf Choir and the RTÉ Concert Orchestra among others. 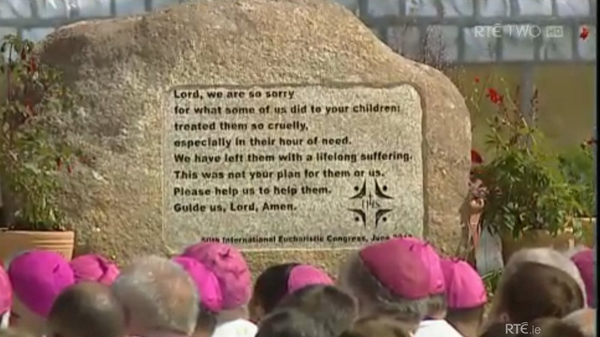 Healing Stone will go on permanent display at Lough Derg