Millions of Egyptians have voted today, choosing their leader freely for the first time in their history.

The Muslim Brotherhood said their candidate had an early lead over fellow Islamists and rivals who served ousted President Hosni Mubarak.

The Brotherhood said on its television channel that its candidate Mohamed Mursi was ahead based on the tally from some districts.

The influential Islamist group, with its well-organised support base, had been expected to do well.

Other candidates claimed to be ahead in some areas, but the overall picture will not be clear for some time.

After six decades under military-backed rule, Egypt's 50 million eligible voters were choosing whether to entrust the nation to an Islamist president, alongside the Islamist-led parliament they elected previously.

However, secular figures such as ex-Arab League chief Amr Moussa, 75, and Mubarak's last premier Ahmed Shafiq, 70, are in with a chance, appealing to Egyptians wary of radical change.

Egyptians seemed increasingly polarised between those determined to avoid handing the presidency back to a man from Mubarak's era and those fearing an Islamist monopoly of ruling institutions.

If no one wins more than half the votes needed for outright victory, the top two candidates will contest a 16-17 June run-off.

The vote is a crucial stage in a turbulent army-led transition blighted by protests, violence and political disputes.

The generals who took charge when Mr Mubarak was ousted on 11 February 2011 have promised to hand over to the new president by 1 July.

Even then the army, with its privileges and vast business interests, is expected to wield influence for years to come.

A tussle over who should write the constitution also means the new president will not know his own powers when he is elected.

Whoever wins faces the daunting tasks of mending a broken economy and re-establishing security, which are both big public concerns.

Former leader Hosni Mubarak, 84, is on trial for ordering the killing of protesters and for corruption. A verdict is due on 2 June. 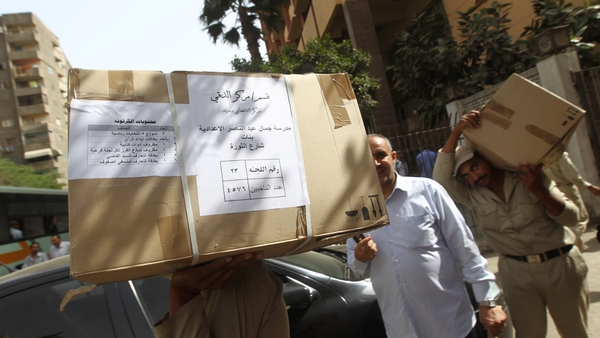 No clear frontrunner as 50 million Egyptians vote in presidential elections