Up to 50 million Egyptians went to the polls in free elections for the first time in their history.

It will be the first time that most Egyptians, ruled down the centuries by pharaohs, sultans, kings and military officers, have had a genuine chance to choose their leader.

With no reliable opinion polls, it is unclear who will win the presidency.

However, Egyptians are revelling in the uncertainty after the routinely rigged votes of Hosni Mubarak's 30 years in power.

Long queues formed at polling stations early today, and some were packed late into the evening.

But turnout, so far, seemed lower than an earlier parliamentary vote when Islamists swept up most seats.

Voting passed off relatively calmly, although candidate Ahmed Shafiq, who was Mubarak's last prime minister, came under attack from protesters who threw stones and shoes at his convoy as he voted at a Cairo polling station late in the day.

The election is a momentous sequel to the popular revolt that toppled Mr Mubarak 15 months ago.

The military council in charge of a messy political transition since then has overseen a constitutional referendum, parliamentary polls and now a vote for a president to whom it has promised to hand power by 1 July.

The Muslim Brotherhood said its candidate, Mohamed Mursi, was ahead after the first of two days of voting. Amr Moussa's campaign also put Mursi in the lead with the former Arab League chief second. The reliability of such claims is untested.

Independent monitors said they saw no major abuses, although voters complained of some illegal campaigning outside polling stations.

The mood was festive and relaxed, with voters chatting in queues that thinned as temperatures climbed and swelled again in the evening.

Voting was extended by one hour and the government declared tomorrow a holiday to encourage a high turnout.

Official first-round results will only be announced on Tuesday, but the outcome could be clear by Saturday. 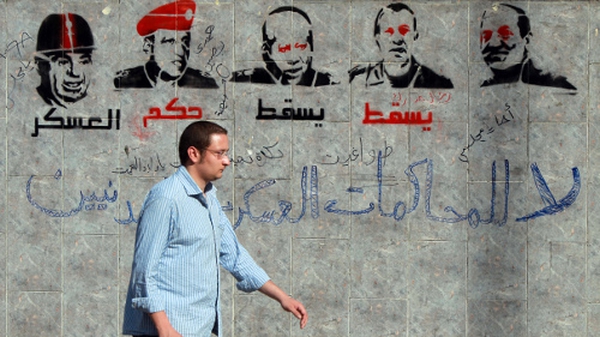