President Karolos Papoulias has summoned all parties in parliament, apart from the ultra right, to a third day of talks tomorrow.

Greek Socialist leader Evangelos Venizelos said he was not optimistic that a coalition government can be formed, but urged all parties participating in the talks to fight until a solution was reached.

Tomorrow's meeting will seek to form a government of "distinguished and non-political figures," said Mr Venizelos, who with New Democracy in a technocrat coalition last year implemented the bailout whose austerity measures Greek voters largely rejected in elections last weekend.

Antonis Samaras of New Democracy said: "Everyone must take their responsibilities ... our efforts continue tomorrow.

"Our mandate all together is to build a government," Mr Samaras said.

Democratic Left head Fotis Kouvelis, who had earlier said that there was no chance of a deal if the radical left Syriza party was not included, indicated he would go to tomorrow's meeting.

Syriza leader Alexis Tsipras said he would also attend while NET TV reported that the Greek Independent party had agreed to take part, meaning only the hardline Communists (KKE) and far-right Golden Dawn would be absent.

President of the European Commission Jose Manuel Barroso expressed the hope Greece could stay in the eurozone but Athens had to live up to its commitments, his spokeswoman Pia Ahrenkilde Hansen said.

Today's developments seem like an attempted return to that solution which at least proved stable long enough to get the debt deal through but the political landscape is now very different.

Syriza has capitalised on the groundswell of frustration in Europe with governments which put austerity before growth, demonstrated only last week in France where Socialist Francois Hollande ousted President Nicolas Sarkozy largely on his pledge for change.

Syriza, which says it wants to remain in the eurozone, is widely tipped to emerge as the largest single party if Greece has to go to the polls again, threatening to prolong a crisis which has rumbled on since early 2010. 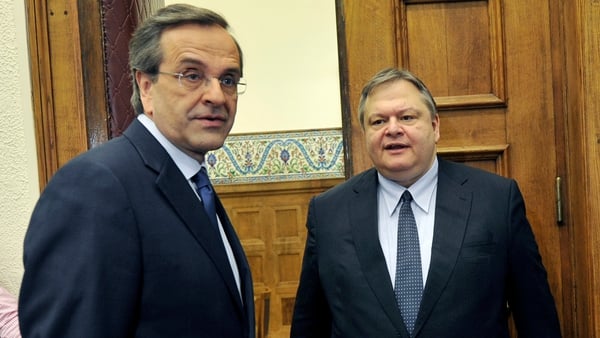