There is growing expectation in Greece that another election will be required to break the political deadlock and enable a coalition government to be formed.

However, the effort to form a coalition is seen as doomed after he demanded they first agree to tear up the country's EU/IMF bailout deal.

An inconclusive election on Sunday has left Athens in political disarray, with no clear path to form a government, a new election likely within weeks and speculation escalating that Greece could be pushed out of Europe's single currency bloc.

Voters enraged by economic hardship repudiated the two parties which led Greece for decades - conservative New Democracy and Socialist PASOK - the only groups that back the €130bn bailout that saved Greece from bankruptcy.

The remote chance of Mr Tsipras forming a coalition faded even further yesterday when New Democracy leader Antonis Samaras promptly rejected his demand to scrap the bailout, warning such a move could drive the country out of the euro.

New Democracy and PASOK, which between them had 77% of the vote just three years ago, saw their combined share fall to just 32% and PASOK reduced to third place.

Mr Samaras was given the first chance to form a government but failed.

Yesterday, Mr Tsipras was given three days to try. He was due to meet Socialist PASOK leader Evangelos Venizelos and Mr Samaras today.

If, as increasingly seems likely, no politician is able to cobble together a majority in the 300-seat parliament, a new election would have to be held in three to four weeks. 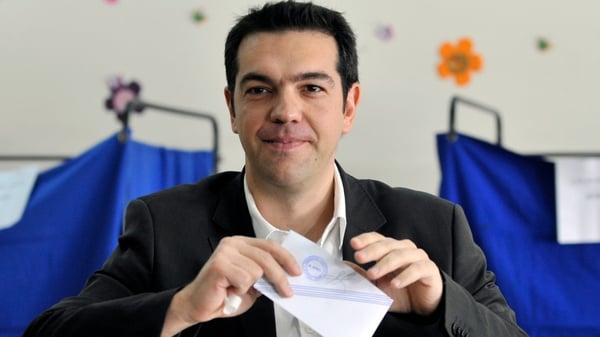