A radical Muslim cleric once described as Osama bin Laden's "right-hand man in Europe" has been re-arrested in Britain.

Jordanian preacher Abu Qatada has been under virtual house arrest at his family home in London since February.

He had been released from a British prison after a court said his detention without trial was unlawful.

British authorities are to resume plans to deport him to Jordan, where he has been convicted in his absence of involvement in terrorist plots.

The court's decision to release him followed a ruling by the European Court of Human Rights in January that Qatada would not receive a fair trial in Jordan because evidence against him may have been obtained using torture.

The findings have embarrassed the British government, which maintains that Qatada is a national security risk, and prompted calls from politicians to defy the European court and deport him.

Qatada, whose real name is Omar Othman, has been fighting attempts to deport him for six years.

British authorities say videotapes of his sermons were found in a German apartment used by three of the people who carried out al-Qaeda's 11 September 2001 attacks on the United States.

A court in Jordan has found Qatada guilty in absentia of involvement in two bomb plots and a senior British judge has described him as a "truly dangerous" supporter of radical Islamist groups.

Qatada, a father of five, denies belonging to al-Qaeda.

He was described as Bin Laden's "right-hand man in Europe" by Spanish high court judge and human rights investigator Baltasar Garzon in 2004 after 191 people were killed by bombs put on board commuter trains in Madrid.

British Home Secretary Theresa May travelled to Jordan in March to seek a deal that would allow the deportation to proceed by gaining assurances that torture evidence would not be used against Qatada.

Qatada was expected to appear in a specialist court where the government would seek to overturn his bail and return him to prison. 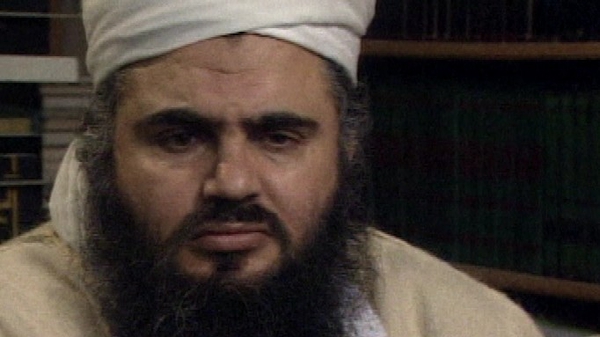