The Tánaiste has admitted that the Government needs to do more to create jobs and stimulate investment.

In his leader's address to the Labour Party Conference, Eamon Gilmore also expressed frustration at the pace of efforts to tackle mortgage arrears.

Mr Gilmore said he was confident that the Government's strategy was working and that Ireland will recover, although he admitted there were times in the first few weeks of the coalition's term that he feared the country would "topple over the cliff" and go the way of some banana republic.

Recovery was the theme of the address and Mr Gilmore said progress had been made on job creation but that more needed to be done to get the domestic economy moving again, to create jobs and stimulate investment.

Mr Gilmore said he was "deeply frustrated" by how slow progress had been on the problem of distressed mortgages, but he and the Taoiseach had taken personal responsiblity on the issue.

He told delegates two more difficult Budgets would be needed - but said "most of the hard work has now been done".

The Tánaiste said it was easy to do good things in good times but in moments of crisis "you can really see into the soul of the nation".

He said this was why it was important for the Government to make progress on universal GP care, a national literacy strategy, building the national children's hospital, and ending the practice of locking children up in adult prisons.

Earlier the conference centre at NUI Galway had been locked after protesters broke through security cordons.

Around 4,000 people were taking part in a protest march, chiefly against the Household Charge, when a small number started to try removing barriers.

Gardaí used pepper spray on a number of protesters, after some violence was directed at them.

Later, the protesters broke through the cordon and got to the centre's doors, which were locked against them. The centre was later reopened.

Asked earlier if he had any message for the many protesters outside the conference, Mr Gilmore said: "Have a nice day."

Inside, delegates voted to oppose the sale of semi-State assets by the coalition Government.

Attendees backed a motion totally rejecting any future sales after party organisers failed in an attempt to have the measure referred back.

Meanwhile, Minister for Public Expenditure & Reform Brendan Howlin told the delegates he would carry out a "root and branch" reform of ethics legislation in the wake of the Mahon and Moriarty reports.

Minister Howlin said Labour emerges from both reports with a "clean bill of health".

He said that unlike others when a problem emerged, Labour dealt with it and said it campaigned for ethics rules long before others.

Minister Howlin also told attendees to trust those it had put into government to do the job.

He was responding to a delegate who had rejected the postponement of the payment of the Anglo promissory note as "nothing".

Minister Howlin said such achievements had come about following months of painstaking negotiations.

Frank Barry of the UNITE trade union told the conference that austerity was failing as predicted by the union movement.

Also addressing the conference, Minister of State for Health Roisin Shortall warned that unless there is fundamental reform in the health services there will be substantial cuts in services.

Mr Quinn said it was pluralist and wanted to see diversity reflected in schools, but he also received some criticism from delegates.

Gerry Kerr from Glasnevin North branch called on him to apologise for what he called the "fiasco" of the DEIS cuts.

Patrick Nulty, who lost the party whip after voting against Budget measures, said the party should not accept any cuts to disadvantaged schools.

Delegates this morning rejected a controversial document from the party's Clontarf branch on religious discrimination.

Urging delegates to support the document, Clontarf delegate John Suttle said it was aimed at removing illegal barriers to children entering national schools on the basis of their religious beliefs.

However, referring to another proposal in the document, Minister Quinn said it would require him to run an "ideological and religious slide-rule" over civil servants.

The motion was overwhelmingly rejected by delegates.

Mr Suttle, who wrote the report, said the minister had rejected it on the basis of something that was not actually in it.

He told RTÉ that a proposal to look at the beliefs of senior civil servants in the Department of Education had not been included in the final report.

That proposal emerged from the Ryan Report, which noted "the deferential and submissive" attitude of the department to the religious congregations. 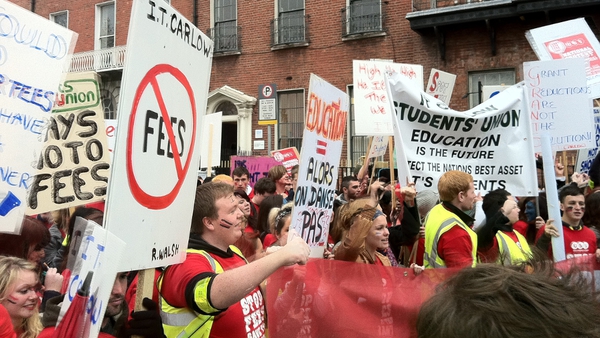