Government Chief Whip Paul Kehoe has denied there is a rift among the Coalition partners over the issue of Fine Gael ministers meeting North Tipperary TD Michael Lowry.

Minister for Finance Michael Noonan said Mr Lowry led a delegation from Foróige to a meeting in his office, while Minister for Health James Reilly said Mr Lowry was one of three TDs who met him last November about a nursing home in his constituency.

Other Cabinet members have questioned the wisdom of Minister for the Environment Phil Hogan holding a meeting with the North Tipperary representative days after publication of the Moriarty Tribunal report, which made adverse findings against Mr Lowry.

Speaking today, Mr Kehoe said there were no tensions over the matter, adding that he thought the story was being blown out of proportion.

He said the ministers who met Mr Lowry all did so in line with the guidelines set out in the Cabinet handbook.

In response, Fine Gael chairman Charlie Flanagan asked on his Twitter account if Joan Burton had a Government deathwish.

Mr Flanagan today confirmed he wrote the tweet and would not be commenting further.

Mr Kehoe said Mr Flanagan's opinions were his own and not that of the Fine Gael party.

In its final report the Moriarty Tribunal concluded that Deputy Lowry had an "insidious and pervasive" influence on the competition that awarded the State's second mobile phone licence. Mr Lowry has stated that he rejects the findings. 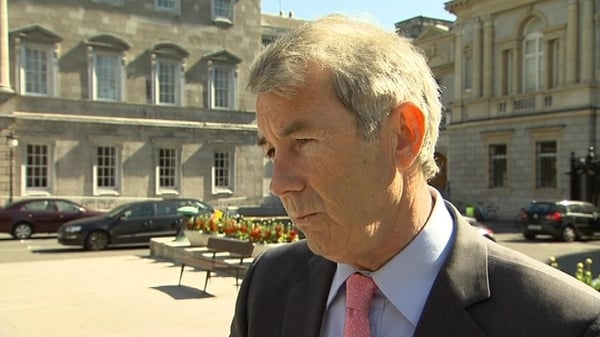