Independent TD Michael Lowry has said he has had meetings with a number of ministers in the past year.

His comments come after it emerged that a meeting took place between Mr Lowry and Environment Minister Phil Hogan within days of the publication of the Moriarty Tribunal report.

Mr Hogan saw Mr Lowry in connection with a recycling firm in trouble, just two days before telling the Dáil that he had no truck with those criticised by Moriarty.

Mr Lowry trenchantly defended his right to represent his constituents, insisting he had met other ministers in the last year.

He said he had been trying to save 35 jobs jeopardised by official regulations and would have been annoyed had the meeting been cancelled.

Minister for the Arts, Heritage & the Gaeltacht Jimmy Deenihan said it would have been better if Mr Hogan had not met Mr Lowry days after the report's publication.

Mr Deenihan said, however, that he understood how the meeting would have taken place.

Speaking on RTÉ's Morning Ireland, Mr Deenihan said ministers usually arrange meetings ahead of time, and that obviously this meeting was arranged "far in advance of the report being published".

He said it was also obvious that at the meeting notes were taken and no reference was made to the Moriarty Tribunal.

Mr Deenihan said if Mr Lowry had wanted to meet the minister in private, they would have done so outside of the department.

"As I see it, this meeting obviously had been organised some time beforehand, it was about farm waste management, there were a number of other people in the room, and I'd say it was in that context, that meeting happened,” Mr Deenihan said.

He added that a number of State agencies were now examining the Moriarty Report and Taoiseach Enda Kenny had assured them that nothing would stand in their way.

He added: "This will be open for further discussion and the man who will have to clarify this matter will be the minister himself."

Minister for Social Protection Joan Burton has said the Government has to be conscious of how ministers interact with people against whom tribunals have made adverse findings.

She said she is not aware of the details, but said she concurred with Minister Deenihan who would have preferred if the meeting had not taken place.

In response to Ms Burton’s comments, Mr Lowry said she was presiding over a department in chaos.

In an interview with RTÉ, Mr Lowry said that instead of “'jumping on everything that moves politically”, she should focus on the problems caused by payments that are delayed or cut off.

A report in today’s Irish Examiner says that Mr Hogan and a department official met Mr Lowry and a business group in March last year, six days after the report's release and after calls by Mr Kenny for Mr Lowry to step down.

A spokesman for Mr Hogan confirmed that the meeting, which was about farm waste, took place and assumed that it had been scheduled before the report came out.

He said that because the minister's diary is an electronic one, it is not possible to know exactly when the meeting was scheduled, and there is no paper record of the meeting being set up.

The spokesman said that had the minister wanted to meet in secret with Mr Lowry, there would have been "a multitude of ways of doing it".

The Moriarty Report described Mr Lowry as having an "insidious and pervasive" influence on the competition that awarded the State's second mobile phone licence to Denis O'Brien's Esat Digifone consortium. 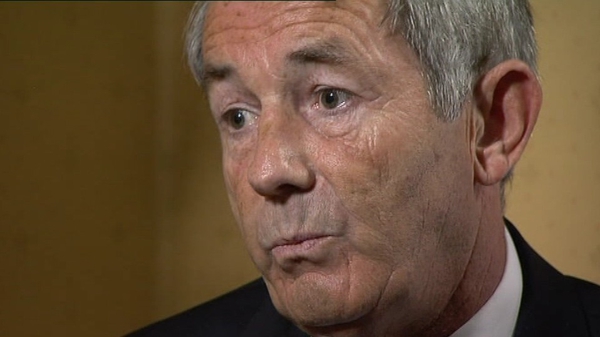