James Murdoch has bowed to pressure and resigned as BSkyB chairman today.

He admitted his links to the News International phone-hacking scandal threatened to damage the satellite broadcaster's reputation.

Mr Murdoch said he did not want his position to become a "lightning rod" for BSkyB as he stepped down with immediate effect following months of pressure.

He relinquished his role as NI executive chairman in February.

The deputy chief operating officer at News Corporation will stay on the board as a non-executive director and will be replaced by deputy chairman Nick Ferguson.

Mr Murdoch leaves the position just weeks before a parliamentary report is published into reporting practices at the News of the World and an expected appearance alongside his father at the Leveson Inquiry.

His departure comes despite receiving backing from BSkyB shareholders, who reappointed him at the company's annual general meeting last November.

Mr Murdoch recently stepped down from the boards of auctioneer Sotheby's and pharmaceutical firm GlaxoSmithKline.

In a letter outlining his resignation, Mr Murdoch, who was appointed BSkyB chairman in December 2007, said: "As attention continues to be paid to past events at News International, I am determined that the interests of BSkyB should not be undermined by matters outside the scope of this company.

"I am aware that my role as chairman could become a lightning rod for BSkyB and I believe that my resignation will help to ensure that there is no false conflation with events at a separate organisation."

Tom Mockridge, News International chief executive, which publishes The Times, the Sunday Times and the Sun, as well as the NotW before it was shut down, will replace Mr Ferguson as deputy chairman. 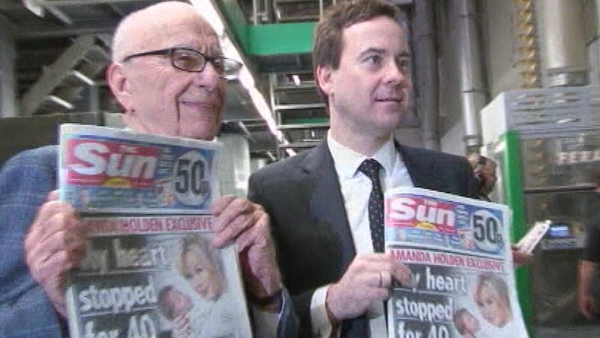