TDs who oppose the household charge have again told the public not to pay the levy.

The call came during a demonstration outside Leinster House in Dublin, in protest at the charge.

Earlier, inside the Dáil, Minister for Education Ruairi Quinn rejected Opposition calls for the Government to withdraw the household charge, saying ordinary citizens would end up paying the price for what he called the irresponsible stance taken by some elected representatives.

He told a Sinn Féin TD Jonathan O'Brien that he was inciting people not to pay the charge and therefore to break the law.

The minister said it was not constructive for any member of the Dáil to encourage people not to pay the charge. He added that deputies had a duty to uphold the law.

Deputy O'Brien said a large section of the population, including himself, had decided not to register to pay the charge, and asked the minister if it was now time to scrap the tax.

The Sinn Féin TD for Cork North Central said he had been elected to implement just and fair laws, but the household tax was neither.

Legislation to be available in Irish and English

Irish and English versions of the legislation governing the new household charge are currently with the printers and should be available next week, according to information provided to the Office of the Irish Language Commissioner.

An Coimisinéir Teanga, Seán Ó Cuirreáin, has told Nuacht that while the English version is already available in electronic format on the internet, printed versions are not available yet in either language.

Acts of the Oireachtas must by law be printed and published simultaneously in both official languages as soon as possible after their enactment.

However, the law does allow for initial publication in one language in electronic format, according to the commissioner.

The High Court yesterday allowed a challenge to the legislation enacting the Household Charge as it has not yet been published in Irish.

Asked about the challenge, Socialist Party TD Joe Higgins said the focus of their campaign against the charge was to urge the boycotting of it.

Earlier the Fianna Fáil environment spokesperson Niall Collins said it is now quite clear that there is a potential for the legislation to unravel as a result of the challenge.

Deputy Collins said the High Court action has brought doubt and confusion to people's minds, which needs to be cleared up.

He said it is worrying for the Government that only 15% of households have so far paid and said it shows that the coalition got it wrong in not including more exemptions to the charge.

The €100 charge must be paid by 1.6 million eligible household before the 31 March deadline or else face fines. 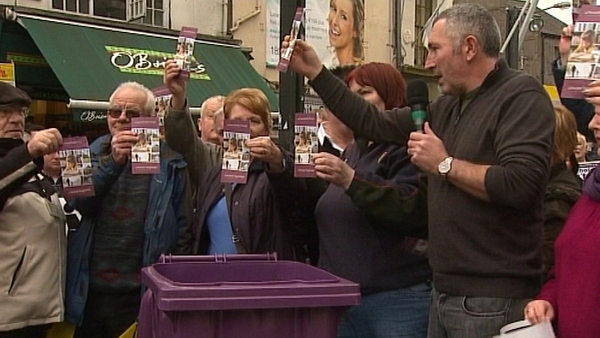