The Occupy Dame Street camp outside the Central Bank in Dublin has been dismantled in an early morning operation.

Up to 100 gardaí and officials from Dublin City Council were involved in the operation, which got under way at about 3.30am.

Up to 15 protesters were kept outside a perimeter while the site was cleared.

One person was arrested for a public order offence outside the cordon during the operation.

The Central Bank confirmed that "following serious health and safety and public order concerns, raised with the Bank by An Garda Síochána, notably in relation to the forthcoming St Patrick's Day events, the bank ... [requested] the garda to peacefully remove the occupiers and the encampment from the Central Bank plaza".

In a statement, a spokesperson said that the bank will "continue to take whatever advice is forthcoming from the garda in terms of the continued safe use of the plaza".

They had been camping at the site since last October in solidarity with the Occupy Wall Street demonstration in New York, which was closed down in November.

Just after 7am the streets were re-opened and protesters were allowed to return to the site.

Yesterday, Minister for Tourism Leo Varadkar said it was regrettable that those involved in the protest would not consider relocating for a few days during the St Patrick's Day festival celebrations.

Around 50 protestors from the Occupy Dame Street took part in a protest outside Pearse Street Garda Station in Dublin city centre this evening.

Up to 40 gardaí surrounded the garda station.

The protestors then left Pearse Street Garda Station and walked back towards the Central Bank. 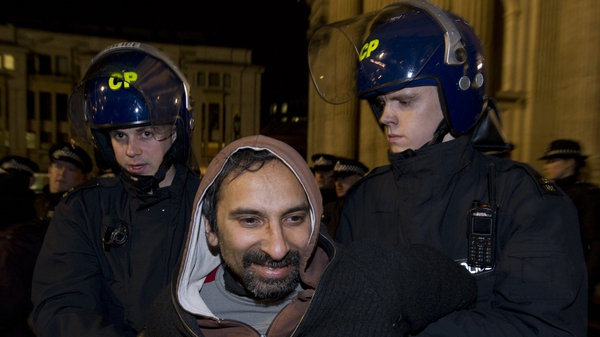