Police and dozens of bailiffs have removed tents from the Occupy London camp at St Paul's Cathedral in England.

The operation, which began just after midnight, was mostly peaceful but 20 people were arrested.

Occupy London was last week refused permission to appeal against a High Court decision to allow their eviction to proceed.

The camp was set up last October as part of Occupy London's campaign against corporate greed.

City of London Corporation said in a statement: "We regret that it has come to this but the High Court judgment speaks for itself and the Court of Appeal has confirmed that judgment.

"The City of London Corporation is ensuring vulnerable people are being helped and supported to find appropriate accommodation in partnership with Broadway, a charity for the homeless.

Granting orders for possession and injunctions against Occupy London at the High Court last month, Mr Justice Lindblom said the proposed action by the City of London Corporation, which it pledged not to enforce pending appeal, was "entirely lawful and justified", as well as necessary and proportionate.

The appeal judges, headed by the Master of the Rolls, Lord Neuberger, said that the protesters had raised no arguable case. The corporation called on campers to remove their tents voluntarily.

Although some remained on site when police arrived, many began dismantling the equipment before bailiffs moved in.

Gary Sherborne, 50, said: "We haven't got any choice and I'd rather protect the tent for another day without it being destroyed by the bailiffs."

A group of protesters remained defiant for a time, waving flags and banging tambourines on top of a makeshift wooden structure facing the cathedral.

However, this platform was eventually dismantled by bailiffs after police in riot gear surrounded it.

Campaigners were also cleared from the steps of the cathedral. 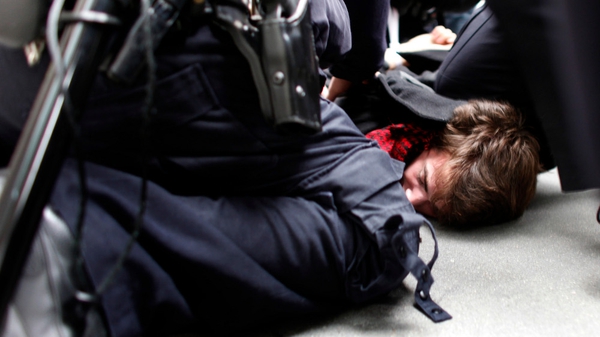