The funeral mass has taken place in Belfast for the comedian Frank Carson, who died from stomach cancer last week at the age of 85.

Deputy First Minister Martin McGuinness was among those who attended the mass at St Patrick's Church.

In his homily, Bishop Edward Daly, recounted telling Mr Carson a joke only to be told he would never make a comic.

The bishop promised not to make jokes or try to be witty but just remember the 85-year-old as he was.

"Frank made millions of people smile and laugh," he said.

"He brightened up their lives. He was a prime minister of fun. That was his mission in life.

"In his live performances, he could light up an audience and make them laugh and laugh.

"That is surely a great service to humanity.”

The coffin was carried out to the applause of onlookers and the refrain of "it's a cracker", with a recording of Frank, who supported integrated education in Northern Ireland, singing with schoolchildren.

The cortege paused outside St Anne's Anglican Cathedral for a tribute and prayer from Rev John Mann in a symbol of the comic's dedication to cross-community relations.

Rev Mann said: "We are thankful for Frank's humour, for the happiness he spread, for embracing this Cathedral in his concern and for at all times expressing those great qualities of hope and love through word and action, that transcend division and bring people together in common endeavour."

The cortege toured Belfast city centre before making its way to Milltown cemetery, where Mr Carson's son read a eulogy before burial.

Mr Carson, a former member of the British parachute regiment and plasterer, was known for his part in talent show ‘Opportunity Knocks’ as well as ‘The Comedians’ and ‘Tiswas’.

He toured Ireland, the UK and further abroad.

His family recalled: "He did not beat the illness but he had several months after his operation laughing and joking." 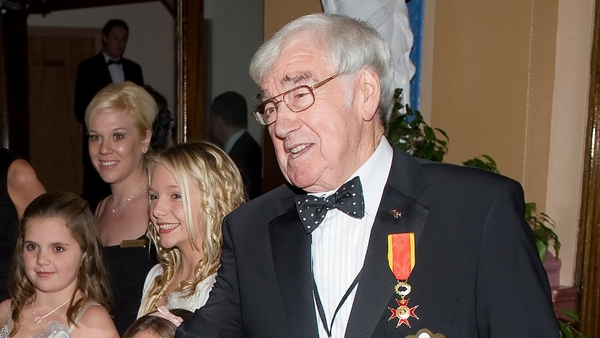