The gardaí co-operated fully with the RUC during the investigation into the IRA ambush at Narrow Water in 1979 where 18 British soldiers died, the Smithwick Tribunal has been told today.

The testimony from retired Detective Inspector Gerry McCann contradicted evidence given yesterday by another senior RUC officer who said there was no co-operation.

Today's witness, who was based in Newry until the mid-1980s, also told the tribunal that he trusted "with my life" one of the three former gardaí being investigated by the tribunal on suspicion of collusion with the IRA.

Det Insp McCann said he admired Dundalk Det Sgt Owen Corrigan and the work he had done. He said he never had any concerns about Mr Corrigan during his years on the border "nor were any concerns ever expressed to me" by other RUC colleagues.

Mr Corrigan, along with Leo Colton and Finbarr Hickey, are three former garda sergeants being investigated by the tribunal to see if they colluded with the IRA in the murder of two senior RUC officers in March 1989.

All three deny the allegations.

Retired Det Insp McCann told the tribunal that he would have often discussed his travel routes to and from the Republic with Mr Corrigan and taken his advice on what way to travel.

The witness said if Mr Corrigan had wanted he could have set him and many other RUC officers up for the IRA.

Under cross-examination by Darren Lehane, Counsel for Mr Corrigan, he said he found it "unbelievable" and "incredulous" that other RUC officers would have had concerns about Mr Corrigan but never passed them onto him.

The witness said he had nothing but admiration for Mr Corrigan.

Under cross-examination by Michael Durack, Counsel for the Garda Commissioner, the witness said there had been concerns about the RUC colluding with loyalist paramilitaries but he "never came across anything to give any concern about collusion between the gardaí and the IRA."

Mr McCann also disputed evidence given yesterday by Witness 68 regarding the involvement of Mr Corrigan in the Narrow Water investigation. Eighteen British soldiers in an IRA ambush while a British tourist who was on the southern side of the estuary died when he was shot by the soldiers firing across the River Newry.

The tribunal was told that Mr Corrigan was not the officer in charge of the crime scenes in the Republic where the IRA had triggered the bombs.

The witness also insisted there was "full co-operation" between the gardaí and the RUC. The relationship generally between the forces was second to none, he said.

The witness was also cross-examined by Neil Rafferty, Counsel for the former British agent within the IRA, Peter Keeley. The retired detective inspector agreed that if several other RUC officers had expressed concerns about Mr Corrigan, they are unlikely to have made them up but added that no such concerns had been expressed to him.

Asked who had been in charge of smuggling by the IRA along the border, the witness said he did not know.

Mr Rafferty pointed out that as a detective Inspector in the border area for ten years, that would be something he would be expected to know. He asked the witness if Thomas 'Slab' Murphy was the man involved to which Mr McCann replied he had "no idea”.

The tribunal also saw film footage from RTÉ showing the scene at Narrow Water in the days after the IRA ambush.

A retired garda fingerprint expert has told the tribunal that a flood in Garda Headquarters destroyed prints he had taken from an IRA bomb factory in Co Louth.

Det Garda John McGee said he went to the site in Omeath in 1989 and obtained finger and palm prints from equipment there. However, he was unable to find a match for them in the garda fingerprint database.

He said he could not recall if he had been asked to check the marks against prints from Patrick 'Mooch' Blair, a convicted IRA bombmaker, and Peter Keeley.

Mr Keeley had earlier told the tribunal that both he and Mr Blair had fled when they heard the garage where they were making the bomb had been raided by the gardai.

However, they returned within days after he said he had been told "our friend" had taken care of everything. Mr Keeley said that was a reference to Owen Corrigan.

Under cross-examination by Darren Lehane, the witness confirmed that the former Mr Corrigan's name was not on the list of gardai at the scene.

Asked about the flooding, Mr McGee said he was told that the prints had been destroyed in a flood but he could not say when that flood happened. He had retired in 1991.

Counsel for the tribunal, Mary Laverty, said they were trying to establish when the flood had happened and the Garda Commissioner had been aware of this for several weeks. 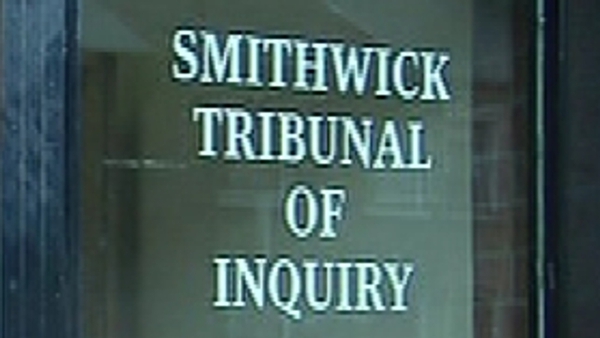