Sinn Féin TD Aengus Ó Snodaigh has defended his use of hundreds of ink cartridges, worth over €50,000, over a two-year period.

Speaking on RTÉ's Morning Ireland, Mr Ó Snodaigh said he was printing material to inform his constituents of various changes and upcoming protests.

A report in today's Irish Daily Mail, based on information released under the Freedom of Information Act, said Mr Ó Snodaigh had taken 434 printer cartridges over a two-year period.

That left the total value of the cartridges at over €50,600 over the two years.

Speaking to reporters at Leinster House, Mr Ó Snodaigh said that he would pay the outstanding money owed to the Oireachtas for print cartridges "tomorrow".

Mr Ó Snodaigh is being pursued for a €3,000 bill incurred when a limit was imposed on the number of print cartridges supplied free of charge by the Houses of the Oireachtas three years ago.

He said he would cooperate with any enquiry, but denied he had any "moral responsibility" to pay back money to defray the cost of the €50,000 worth of cartridges he received before the limit was set.

Fianna Fáil leader Micheál Martin has called for an investigation into the cartridge bill.

Mr Martin said the €50,000 bill run up by Mr Ó Snodaigh was "an extraordinary amount", and said it should be investigated, possibly by the Oireachtas Commission.

Sinn Féin deputy leader Mary Lou McDonald conceded that the ink bill was "excessive", but said her party colleague had not broken any rules and said the system was at fault.

Ms McDonald said Mr Ó Snodaigh did not realise the cost and would not have run up such a bill had he been advised by the Oireachtas authorities.

Ms McDonald said the system had been changed.

Speaking in the Dáil, Taoiseach Enda Kenny suggested that Sinn Féin leader Gerry Adams carry out an investigatiion into the matter.

Fine Gael's Ray Butler was threatened with suspension from the Dáil after he attempted to use the phrase "an abuse of the system" during the discussion on ink cartridges. 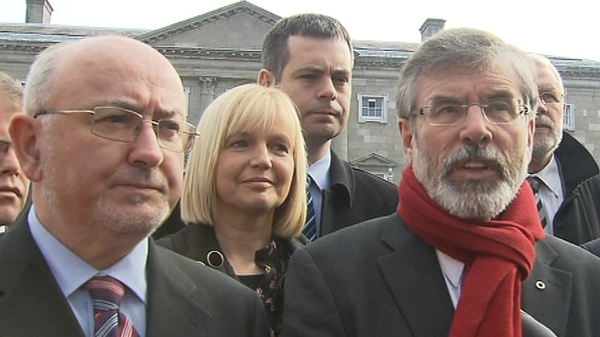