Dundalk businessman Martin McCaughey has been acquitted of charges in connection with an alleged assault of a burglar.

The 48-year-old, with an address at Mount Avenue in Dundalk, Co Louth, had denied the charge of assault causing harm to Daniel McCormack on 27 June 2008 at Clann Chullain Park.

Earlier, Judge Gerry Griffin instructed the jury at Dundalk Circuit Criminal Court to return a verdict of not guilty on a charge of reckless endangerment against Mr McCaughey.

Mr McCaughey had told gardaí that he had "squashed" Mr McCormack, who had robbed his home, up against a wall, Dundalk Circuit Criminal Court had been told earlier.

The court was told that Mr McCormack, who has a number of previous convictions, admitted stealing from Mr McCaughey's home on the morning of the incident.

He took jewellery from the ensuite of the master bedroom where the defendant and his wife were asleep. He received a suspended prison sentence for that offence.

The jury of six men and six women today heard from Melissa Gartland, who lives on the Clann Chullainn Park estate.

Under cross-examination by Brendan Grehan, senior counsel for the defendant, Ms Gartland denied that she had made up her evidence out of sympathy for Mr McCormack, who also lived in the same estate.

Another witness, John Farrelly, told the court that he saw a car speeding through the estate.

Mr Farrelly said he saw the car hit Mr McCormack, reverse and then drive forward hitting him again and pinning him against a railing. The witness also said the defendant was drunk.

Under cross-examination by Mr Grehan, the witness said he could not remember why he did not tell gardaí he believed the accused was drunk.

He said his house was not so far away that he did not see what happened. He also denied Mr Grehan's claims that what he had said was "a total fiction".

Garda Andrew Barron told the court that he was called to the scene at Clann Chullain Park shortly after 6am, where he saw both men.

Garda Barron said he could see some of Mr McCormack's shin bone sticking out of his leg and called an ambulance.

He spoke to Mr McCaughey at the scene. He was angry and in shock, according to the garda.

In answer to a series of questions, Mr McCaughey told the garda that he had chased the other man from his home to the housing estate.

Garda Barron said the defendant told him he had hit Mr McCormack with his car but he kept running. The car then hit him again.

"I squashed him between the railings and my car. He tried to move but couldn't. I reversed and he was left in the driveway," the garda said the accused told him.

Garda Barron said there were no signs that Mr McCaughey had been drinking.

The jury was also shown CCTV footage of Mr McCormack on the grounds of the defendant's house far earlier than he had said he was when giving evidence.

Garda Eric McGovern said he had inspected the scene at Clann Chullain Park and found one set of tyre marks where the incident had taken place.

They showed one braking action by the defendant before the collision took place.

Garda McGovern said the damage to the Mercedes car indicated to him that it was involved in "a glancing contact with an object". 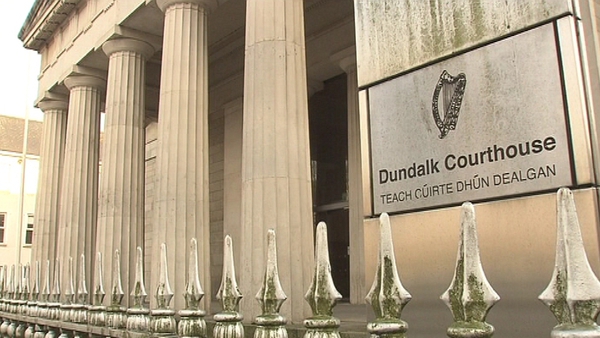