The UN Human Rights Office has called for Syrian officials suspected of war crimes to be referred to the International Criminal Court.

It comes after the latest violence in which at least 28 people were killed and more than 170 injured in two explosions in the northern city of Aleppo.

It is the worst violence to hit the country's commercial hub in the 11-month uprising against President Bashar al-Assad.

Bodies lay on the pavement outside the targeted buildings, as shown in live footage on Syrian television.

Syria's government has blamed "armed terrorist gangs", which is says are backed by Arab and Western nations.

However, a spokesman for the rebel Free Syrian Army blamed President Assad's regime.

"This criminal regime is ... carrying out bomb attacks in Aleppo to steer attention away from what it is doing in Homs, Zabadani and elsewhere," said Colonel Maher Nouaimi.

Aleppo is home to a prosperous business community and continued backing for the President Assad's regime in the city has been crucial in bolstering his regime.

After the explosions, hundreds of protesters marched in several Aleppo neighbourhoods after Friday prayers, as part of nationwide demonstrations denouncing Russia's recent veto of a UN Security Council Resolution aimed at ending the conflict in Syria.

Syrian Observatory for Human Rights said that at least seven people were killed, while another activist group, the Local Coordination Committee put the Aleppo toll at 12 and said 22 others had been killed nationwide.

The figures could not be independently confirmed.

Meanwhile, a firefight broke out in a poor district of Damascus between loyalist forces and rebels battling against President Bashar al-Assad's rule, a witness and activists said.

Members of the Free Syrian Army fought for four hours with armoured backed troops who entered al-Qaboun neighbourhood in the north of the capital, they said, adding that the rebels sustained several casualties but it was not known if any were killed.

"There was a demonstration in Qaboun this afternoon and the army raided the neighbourhood to make arrests," said a resident of Qaboun who gave his name as Fadi.

"But the Obaida bin Jarrah Brigade intercepted it and the two sides exchanged fire. The army used heavy machineguns and anti-aircraft guns and the rebels mostly responded with automatic rifles," he said.

The sound of people shouting "Allahu Akbar" (God is greatest) echoed from buildings in Qaboun as gunfire rang out during the firefight, Fadi said.

On another front, army tanks massed outside opposition neighbourhoods in the western city Homs after a week of bombardments that have killed dozens of civilians and drawn condemnation from world leaders.

Activists in Homs said shelling resumed sporadically in the morning and they feared a big push was imminent to storm residential areas of the city that has come to symbolise the plight of the anti-Assad movement.

The unrelenting bloodshed only highlighted the difficulties that Western and Arab powers faced in trying to resolve the crisis in a country which has a key place in the strategic balance in the volatile Middle East.

Bolstered by Russian support, President Assad has ignored appeals from the United States, Turkey, Europeans, fellow Arabs and other governments to halt the repression and to step down.

Foreign ministers of the Arab League, which suspended a monitoring mission in Syria last month because of the violence, will discuss a proposal to send a joint UN-Arab mission to Syria when they meet in Cairo this weekend, a League official said.

Saudi Arabia has circulated a draft resolution backing an Arab peace plan for Syria among members of the UN General Assembly after a similar text was vetoed in the Security Council last week by Russia and China, diplomats said.

Rights groups estimate that more than 6,000 people have died in the regime crackdown on protests since mid-March.

The revolt started with street protests but has become an armed insurgency in many parts of the country.

Authorities say they are fighting foreign backed "terrorists" in Homs. 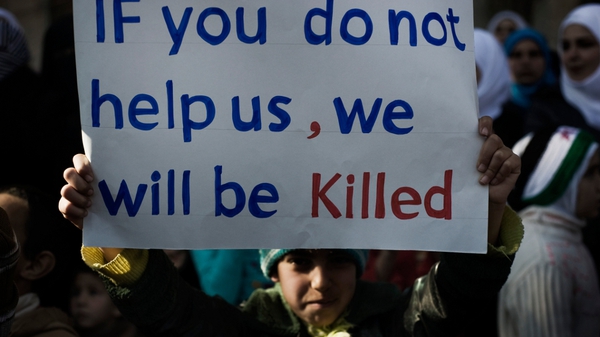 Condemnation of veto on Syria resolution at UN