The Taoiseach and the Tánaiste are in the United States for a series of engagements aimed at encouraging investment in Ireland's economy.

Minister for Jobs, Enterprise and Innovation Richard Bruton is also on the trip, which includes a series of engagements with business and economic leaders in the US.

One of the main events has been a conference at New York University organised by former US President Bill Clinton.

President Clinton promised to chair the conference, which was aimed at increasing investment in Ireland, after his visit to Dublin last October.

The aim was to show those American investors who do not already have a presence in Ireland the advantages of setting up.

Some 100 people from the Global Irish Network, influential friends of Ireland and existing investors in Ireland also participated in the forum.

The roundtable discussion also gave the Taoiseach a chance to outline what he has described as the start of a process which will eventually yield projects through the IDA.

"This is more than a talking shop," the Taoiseach told reporters. He also lauded the news that three American companies Abbott, Hewlett Packard and Big Fish Games will be expanding their operations in Ireland

Mr Kenny said it was a unique opportunity to engage with the highest levels of the international business world.

He said it would help promote Ireland as an investment destination, and is yet another manifestation of how to achieve the mission of the global Irish making a difference together. 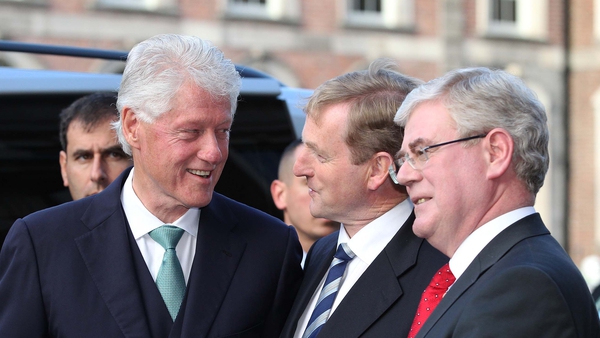