Former US President Bill Clinton has announced his plan for a special summit on investment in Ireland, which will be held in New York in the near future.

As it happened | Exclusive Videos | Have your say | Gallery

It is understood that the New York conference will be targeted at business people who do not already have a connection with Ireland and will seek to widen the scope of the country's contacts beyond those of the Irish diaspora.

The event will be hosted by Teneo. Mr Clinton is the Advisory Chair of the Teneo board.

The summit will examine investment opportunities and hear advice from some of the world's key economic minds on what Ireland's need to do on its road to recovery.

Taoiseach Enda Kenny and Tánaiste Eamonn Gilmore greeted Mr Clinton at the entrance to the castle, where he was the main speaker for the Forum's second and final day.

He told the forum that Ireland had "a lot going" for it and signed off by telling the audience that "you have to create the Ireland of the 21st century".

He also told business people to find new markets to export to, as exports were helping Ireland's recovery.

Following his address Mr Clinton took part in a panel discussion with a number of guests including the Taoiseach, Tánaiste, the CEO of International Airlines Group Willie Walsh, the chairperson of the America Ireland Fund Loretta Brennan Glucksman and musician Bono.

Earlier, Minister for Finance Michael Noonan warned that there is an "impatience" on world markets at the speed with which Europe is resolving the problems in the eurozone.

Mr Noonan said the ratings agencies had been very active in the markets recently and some of the downgrades issued were the result of wider problems in Europe and not the particular countries or institutions involved.

The Minister said the recapitalisation of Europe's banks may involve €100bn, but this "needs to be done as the first step before a solution for Europe can be put in place".

He said responsibility for this lay with sovereign governments, advised by the European Central Bank, adding if capital could not be raised by the banks or governments involved, they could then avail of the stability fund.

Mr Noonan said many positive signals about Ireland were emerging from the Global Irish Economic Forum.

Meanwhile, the Taoiseach said Ireland intends to be the first of the three bailed-out eurozone countries to return to the markets.

Mr Kenny has said the Government wants to sell debt next year and be the first to "wave goodbye to the IMF".

He also said he expects Ireland to pass the next review with its bailout partners this month - adding that "we don't contemplate default, we want to pay our way fully and completely and we will do that".

Meanwhile, the Minister for Communications, Energy and Natural Resources said he "hopes" the Troika administering Ireland's bailout "won't insist on €5bn worth of sales of State assets" and that "half" the proceeds should be used on investment.

Pat Rabbitte said he hoped they would agree to a "sensible disposal" at the "right time".

The Minister also said he hoped Ireland could avail of "half" the money raised in any sale for development purposes.

He said as of now "no decision" had been taken on a wider sale of assets.

The Government is due to meet with the troika this month for the latest review of Ireland's bailout programme, which they have previously said in on track.

It is understood they have asked for a sale of State assets to help pay down Ireland's debt. The Government wants a portion of this to be used on job creation and investment.

Today, the forum focused on promoting Irish culture and dealing with the challenges that Ireland faces in the future. 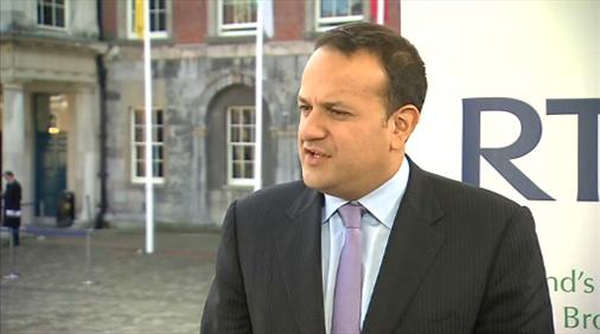