The Minister for Transport, Tourism and Sport has announced details of a new tourism initiative for Ireland.

Addressing the Global Irish Economic Forum at Dublin Castle, Leo Varadkar said plans for a year-long "Gathering" in 2013 could increase visitor numbers to Ireland by a minimum of 300,000.

Day 1 as it happened | Full schedule | Videos | Have your say

It is hoped families will invite friends and relatives home for visits to coincide with special events, such as the St Patrick's Day Festival.

Members of the Irish diaspora from almost 40 countries were attending the opening day of the second Global Irish Economic Forum in Dublin.

The forum is examining ways of generating foreign direct investment and promoting culture as well as increasing export and tourism figures.

Closing the first day of the forum, President Mary McAleese thanked delegates for "putting Ireland so high up your list of priorities".

Mrs McAleese said the Irish people have chosen to be brave over and over, adapting speedily to the rapid changes in fortune, accepting the new era of austerity despite the personal hardships being endured.

Tomorrow, former US President Bill Clinton is due to speak at the Forum.

The 15 working groups at the forum have been asked to propose two or three specific ideas to help achieve these aims.

Irish embassies will be charged with ensuring that the proposals are acted upon and that links with the diaspora are enhanced.

The views of those who have emigrated in recent years are also being sought.

Taoiseach Enda Kenny opened the event with a speech, saying Ireland has never faced "such an unprecedented challenge nor such an extraordinary opportunity".

Mr Kenny thanked delegates for their energy, ideas and "passion for this country".

Tánaiste and Minister for Foreign Affairs Eamon Gilmore said that an implementation body would be established out of the forum with the primary focus on job creation.

Meanwhile, a new online community for Irish people or anyone with an affinity with Ireland was unveiled at the forum.

WorldIrish.com will harness the power of existing social
networks to co-invent a platform between Ireland and its
diaspora.

It was was unveiled by John McColgan, co-founder of
Riverdance and Tyrone Productions.

He said: "The timing of a project like this is opportune as Dublin is now the leading capital for social media with the presence of giants such as Facebook, Google, LinkedIn and most recently Twitter". 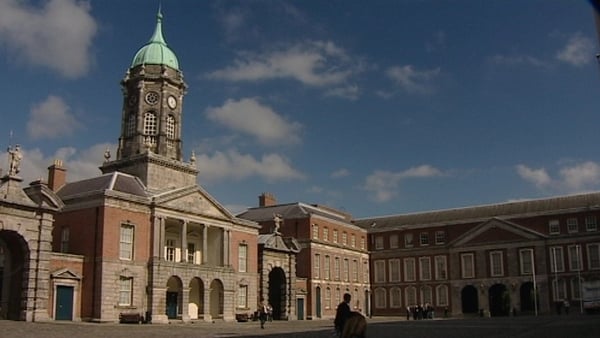