Finance Minister Michael Noonan has concluded his hour long meeting with the President of the European Central Bank, Mario Draghi, in Frankfurt.

It is understood they spoke about the progress Ireland has made within its EU-ECB-IMF programme and the challenges that lie ahead for the country.

The discussions also focused on Ireland's hopes of securing some form of change on the issue of Anglo-Irish promissory.

A spokesman said discussion paper was already being drafted on this issue and, when it is completed, the matter will be progressed further.

Mr Noonan was very cautious about what could be achieved at today's meeting - stating its part of an ongoing process of negotiations.

Earlier today, there was some blunt talking in Brussels as the Greek government was told in no uncertain terms that promised economic reform has to happen.

Swedish Finance Minister Anders Borg told journalists on arrival this morning that it was clear Athens has failed to deliver to date.

Austrian Finance Minister Maria Fekter demanded Greece's main political parties promise, in writing, that they will do what's necessary, otherwise she warned, Greece will not receive the vital second bailout of €130bn.

Greece must also do a deal with private investors in which they agree to accept losses of around €100bn on their investment in Greek bonds - the saga has running for months, but the EU wants a deal now to be done in days.

Ministers also said that international creditors must accept a lower interest yield on new bonds as a substitute for existing bonds.

The Institute of International Finance, which is negotiating on behalf of creditors, has said an interest rate of 4% on the new bonds is the very last offer they will make.

However after last night’s meeting, the chair of the eurogroup of finance ministers, Jean Claude Juncker, said that the rate must be less than 3.5%.

The deal with private creditors is needed to ensure that Greece reduces its debt level to 120% of GDP by 2020 from its current position of 160%.

If Greece and its creditors cannot agree, it is widely thought the country could default as early as March.

Europe 'at the brink'

Meanwhile, former German government minister Joschka Fischer has warned an Irish audience about the dangers of a collapse of Europe's monetary union.

Speaking at the Henry Grattan Lecture series last night at Trinity College Dublin, the former German vice chancellor and foreign minister also likened the rejection of a referendum on the future of Europe to a serious train wreck.

He made the comments during a debate on whether the European project had reached its end.

Mr Fischer said Europe "is at the brink" and that its future depends on the survival of the euro.

He added the economic crisis in Europe is a political one because there is a common currency without a common government and a common treasury.

Mr Fischer also said Europe in its current form is not sustainable and that it must either go back to being individual national states or move on to political union within two to three years. 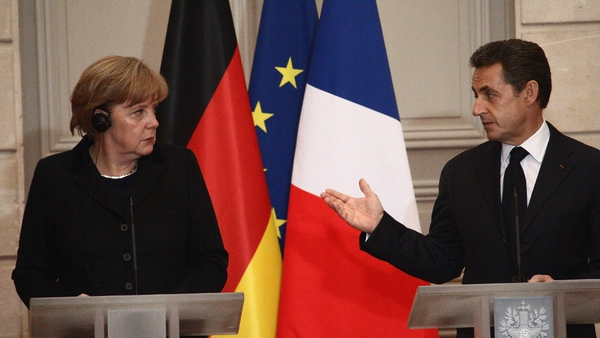