Scientists at the CERN physics research centre say they have found signs of the Higgs Boson, an elementary particle that represents the missing link in the Standard Model of physics.

However researchers warn that conclusive proof of the existence of the particle has yet to be found.

The Higgs Boson, according to prevailing theories of physics, gives everything in the universe its mass.

"If the Higgs observation is confirmed ... this really will be one of the discoveries of the century," said Themis Bowcock, a professor of particle physics at Britain's Liverpool University.

"Physicists will have uncovered a keystone in the makeup of the Universe ... whose influence we see and feel every day of our lives."

The leaders of two teams conducting separate experiments - ATLAS and CMS - revealed their findings to a packed seminar at CERN this afternoon. They have spent over a year trying to find traces of the elusive boson by smashing particles together in the Large Hadron Collider near Geneva.

"Both experiments have the signals pointing in essentially the same direction," said Oliver Buchmueller, senior physicist on CMS.

"It seems that both ATLAS and us have found the signals are at the same mass level. That is obviously very important."

Fabiola Gianotti, the scientist in charge of the ATLAS experiment, said the team had narrowed the search to a signal centred at around 126 GeV (Giga electron volts), which would be compatible with the expected strength of a Standard Model Higgs.

"I think it would be extremely kind of the Higgs boson to be here," she told a seminar to discuss the findings. "But it is too early" for final conclusions, she said. "More studies and more data are needed. The next few months will be very exciting...I don't know what the conclusions will be."

Under what is known as the Standard Model of Physics, the boson, named after British physicist Peter Higgs, is posited to have been the agent that gave mass and energy to matter after the Big Bang creation of the universe 13.7 billion years ago.

While its discovery would cement current knowledge about particles such as electrons and photons, results of work at CERN could also prove it does not exist.

Such an outcome would undermine the foundations of accepted theories of the make-up of the universe.

"If the first inklings of the Higgs boson are confirmed, then this is just the start of the adventure to unlock the secrets of the fundamental constituents of the Universe," said Stephen Haywood, Head of the Atlas Group at the STFC Rutherford Appleton Laboratory.

The ATLAS results were followed by explanation of the second experiment, CMS.

"We are homing in on the Higgs," said Claire Shepherd-Themistocleus, Head of the CMS Group at the STFC Rutherford Appleton Laboratory.

"We have had hints today of what its mass might be and the excitement of scientists is palpable. Whether this is ultimately confirmed or we finally rule out a low mass Higgs boson, we are on the verge of a major change in our understanding of the fundamental nature of matter."

How the Large Hadron Collider works 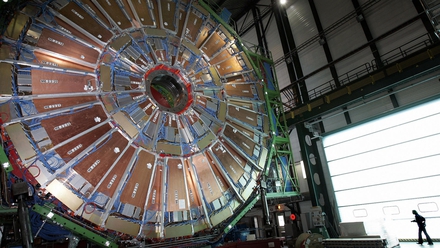 The LHC comprises four huge labs interspersed around a ring-shaped tunnel located near Geneva. It is 27km long and up to 175 metres below ground.

Beams of hydrogen protons are accelerated in opposing directions to more than 99.9999% of the speed of light.

Powerful superconducting magnets, chilled to a very low temperature, then "bend" the beams so that streams of particles collide within four large chambers.

The "smashups" fleetingly generate temperatures 100,000 times hotter than the Sun, replicating the conditions that prevailed just after the "Big Bang" that created the Universe 13.7 billion years ago.

Swathing the chambers are detectors that give a 3-D image of the traces of sub-atomic particles hurled out from the protons' destruction.

These traces are then closely analysed in the search for movements, properties or novel particles that could advance our understanding of matter.

In top gear, the LHC is designed to generate nearly a billion collisions per second.

Above ground, a farm of 3,000 computers, one of the largest in the world, instantly crunches the number down to about 100 collisions that are of the most interest. 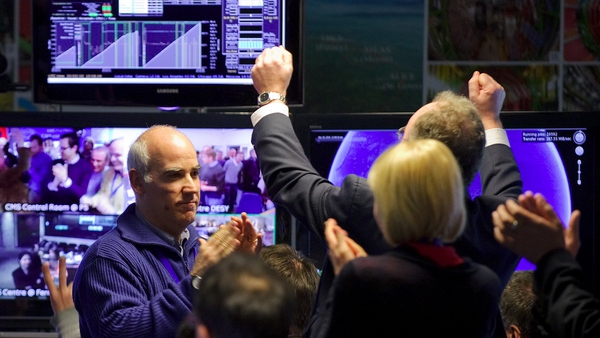