The Taoiseach has said no decision will be made before next March on whether or not a referendum will be needed in relation to EU Treaty changes.

Speaking in Westport, Co Mayo, Enda Kenny said if a referendum was necessary it would be held. "Between now and then a great deal of technical work, of legal work and wording to be gone through."

Referring to Britain's Veto to Treaty changes Mr Kenny said he would have preferred that all 27 EU member states continue to be involved in the discussions.

"Ireland is very interested in seeing that the Prime Minister retains a deep interest in expanding the single market."

Mr Kenny said he was not suggesting a situation where Ireland would set up a conduit for back channel discussions between Britain and the other EU member states, but he said: "We are anxious that every country be involved in the process because of its importance to the 500m people who live in the EU member states."

He will brief opposition leaders tomorrow morning on the outcome of last week’s European summit.

He is to meet Fianna Fáil, Sinn Féin and the technical group for an early session.

The opposition has been critical of the summit outcome, which saw the UK refusing to back a deal in a move which David Cameron said protected the City of London.

Fianna áail has insisted that the UK stance could leave the IFSC exposed.

European Economics Commissioner Olli Rehn earlier said he "very much regrets" Britain's decision not to sign-up to the deal.

Mr Rehn said Britain’s decision would not prevent the City of London's bankers and financial corporations from being regulated.

The new measures, known as the six-pack, will come into force tomorrow. They are aimed at tightening the economic governance of the eurozone.

Mr Rehn described the deal as bold and effective and dismissed media speculation over the legality of the plan as unfounded.

He said Brussels wants a strong and constructive Britain in Europe, for Britain to be at the centre of Europe and not on the sidelines.

British Prime Minister David Cameron has defended his decision to break with European partners, insisting that remaining a member of the 27-nation bloc was in Britain's national interest.

Mr Cameron's decision not to take part in an EU treaty change isolated Britain in the 27-nation bloc and created the biggest rift in his coalition since he took power in May 2010.

He said the choice he had faced was a treaty without proper safeguards for Britain's important financial services industry or no treaty. "The right answer was no treaty," he said. "It was not an easy thing to do but it was the right thing to do."

Yesterday, Cameron's deputy, Liberal Democrat leader Nick Clegg, said he was "bitterly disappointed" with the outcome of the summit, which he said was "bad for Britain."

Ccredit rating agency Moody's has said it will review the credit ratings of all EU countries in the first quarter of next year after last week's summit of European leaders failed to deliver what it called "decisive policy measures".

"The absence of measures to stabilise credit markets over the short term means that the euro area, and the wider EU, remain prone to further shocks and the cohesion of the euro area under continued threat," the ratings agency said in a statement.

Ratings agency Standard & Poor's last week warned the eurozone of a downgrade if the EU summit did not come up with a viable plan.

It said what was announced did not change its previously expressed view that the eurozone crisis was "in a critical and volatile stage". 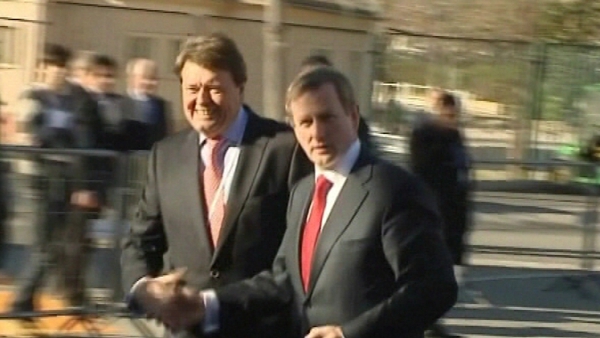