"There is a deal between leaders on the new fiscal compact," an EU official told reporters after four hours of talks.

The 27 EU leaders, meeting in Brussels, agreed on automatic sanctions for euro zone deficit offenders unless three-quarters of states vote against the move, and approved a new fiscal rule on balanced budgets to be written into national constitutions.

However, they were still debating how to strengthen their future permanent rescue fund and whether to give it a banking licence, and had not yet broached the vexed question of whether the new pact requires major changes to the EU treaty.

European Council President Herman Van Rompuy, the summit chairman, wants all 27 EU states to agree to the rule changes via a minor adjustment to a treaty protocol that could be implemented quickly without requiring full ratification.

"The Germans are obsessed with how we are going to do things, saying we have to change the treaty. They are totally obsessed. That's why it can get difficult," an EU diplomat said.

If all 27 EU states do not support more fiscal union by adapting the existing Lisbon treaty, which took eight years to negotiate, then Sarkozy and Merkel want the 17 euro zone countries to go ahead alone with more integration.

Earlier, the Taoiseach said that he will seek a reduction in the cost of Ireland's bail out in exchange for any concession on treaty changes.

Enda Kenny has been arguing that recapitalising Irish banks had been "uniquely onerous" to the Irish taxpayer.

The Taoiseach has said that support was needed to ensure that Ireland could make an early return to the markets.

Arriving tonight at the summit the Taoiseach was tight lipped, saying only that clarity of decision and protection of the euro was of absolute and critical importance.

Meanwhile, The Fianna Fáil leader, Micheal Martin, TD, has said he believed that too high a price was being sought from countries like Ireland under proposals put forward by France and Germany.

Speaking after a meeting of European Liberal Democrats he said there was a need for a significant shift in the role of the European Central Bank as a lender of last resort in solving the debt crisis.

Tonight the meeting of the 27 European leaders has ended without agreement.

Elsewhere, British Prime Minister David Cameron has said that he will veto any treaty to fix the EU's debt crisis if it failed to protect the interests of Britain, in remarks aimed at reassuring euro sceptic members of his ruling Conservative party.

Cameron is under pressure to return from an EU summit aimed at rescuing the euro with something to reassure his restive right-wing, who see the current European crisis as a unique opportunity to reclaim powers from Brussels.

Divisions over Europe tore apart the Conservative party last time it was in power in the 1990s and Cameron is painfully aware of how toxic the issue can be.

A committee that advises Finland's government dismissed as "unconstitutional" a Franco-German proposal for decisions concerning a permanent EU bailout fund to be adopted by a bloc majority rather than unanimously.

The French-German plan provides for decisions to be taken by 85% majority, as is the case at the IMF where voting rights are based on contributions, to the detriment of small nations such as Slovakia.

Tomorrow, leaders are expected to debate France and Germany's proposals to end the eurozone debt crisis.

These proposals include tougher and more immediate sanctions against countries that breach the guidelines on budget deficits.

The French and German insistence on far-reaching treaty change to solve the crisis is not universally supported, nor is their suggestion that 17 eurozone countries could forge ahead to form their own arrangement on a quasi-fiscal union outside the current EU structures. 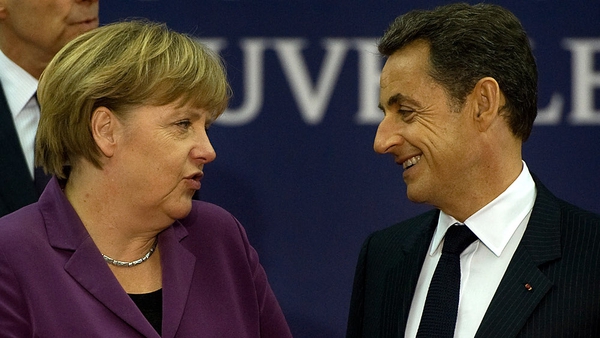