Minister for Agriculture Simon Coveney has said he understood how people might find it difficult to understand how a Government adviser, Ciaran Conlon, could be paid a salary of €127,000 after a €35,000 pay rise following an intervention from the Taoiseach.

Earlier, Mr Calleary said if it was the Taoiseach’s intention to put aside politics and engage people in a new vision, he clearly did not deliver.

Referring to last night’s State of the Nation Address, Mr Calleary said Enda Kenny set out nothing new of substance despite ''having worked for weeks to build up this broadcast''.

Mr Calleary described the address as being like a party political broadcast.

He also said the Irish people were not responsible for the economic crisis and his Government was determined that previous mistakes would never be allowed to happen again.

The Sinn Féin President said Mr Kenny had failed to provide citizens with hope for a route out of the economic crisis.

Gerry Adams described the address as a clear attempt to justify in advance what is expected to be a vicious, unfair budget.

He said the Taoiseach was long on rhetoric and short on substance in his State of the Nation address.

Opposition parties will be given an opportunity to respond to the Taoiseach's State of the Nation address in broadcasts on RTÉ television this evening.

A representative of the Dáil Technical Group, Independent TD Thomas Pringle, will be given three minutes to respond to the Taoiseach's speech just before the Six One News.

Sinn Féin's Gerry Adams will also be given three minutes to respond after the bulletin ends.

Fianna Fáil has been offered a four-minute response after tonight's Nine News on RTÉ. 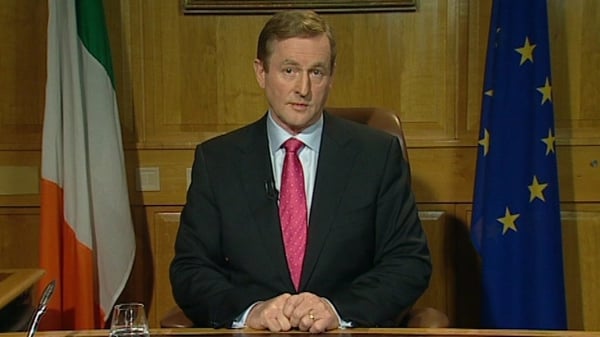