People on the islands of Arranmore, Tory, Gola, Inisfree and Inisboffin have cast their votes in the Presidential election.

Islanders vote ahead of the rest of the electorate to ensure bad weather does not hinder the return of ballot boxes to be counted with the rest of the votes cast in the Donegal South West constituency.

Almost 1,000 people were registered to vote on the islands of Arranmore, Tory, Gola, Inisfree and Inisboffin.

The candidates have already been out today - all seven took part in a 90-minute debate held by Google and Newstalk this afternoon.

Meanwhile, an Ipsos MRBI poll in today's Irish Times shows Mr Gallagher on 40% of first-preference votes. Mr Higgins is on 25%.

Mr Gallagher and Mr Higgins are the only candidates to increase their shares in the poll since the last Irish Times/Ipsos MRBI poll.

Speaking in Carrick-on-Shannon, Minister for Jobs, Enterprise and Innovation Richard Bruton has said there is no need to change the Fine Gael system for choosing a Presidential candidate despite the poor showing of Mr Mitchell in opinion polls.

Mr Bruton said it was a matter for people to review after the Presidential election.

Candidate Seán Gallagher has said he fully expects an onslaught of negative campaigning and coverage over the coming few days.

In a message to supporters on his website, Mr Gallagher said he has been told that some other campaigns are planning to target him with negative leaflets and posters.

He said he would be "really disappointed" by such developments.

Mr Gallagher claims in the letter that all of the candidates have been subjected to relentless attacks during the campaign, but he states that he remains hopeful that the coming days will focus on the messages and policies of the candidates.

No evidence of criminal damage to Dana's car

A garda investigation has found no evidence of criminal damage to a tyre that blew out on Dana's campaign car.

The incident occurred last week as she was being driven from Co Leitrim to Dublin.

Dana and her campaign team initially said they had been told that the tyre could have been deliberately cut.

However, garda forensic collision investigators believe the damage to the tyre was most likely caused by being driven while it was "under inflated" or flat.

Davis to vote against referendum

Independent Presidential candidate Mary Davis has said that she will vote no in Thursday's referendum on broadening the power of Oireachtas inquiries.

Ms Davis said: "This decision has not been taken lightly.

"I fully appreciate that if elected President I will not be able to express any public opinion on any future Constitutional referendum put to the people.

"However, as it would suit the political system for this change to be waved through with a minimum of discussion, and given my concerns at the impact of this proposed change on all citizens, I feel that it is appropriate and important to voice my concerns openly."

Tonight's Frontline debate begins at 9.40pm on RTÉ One Television. 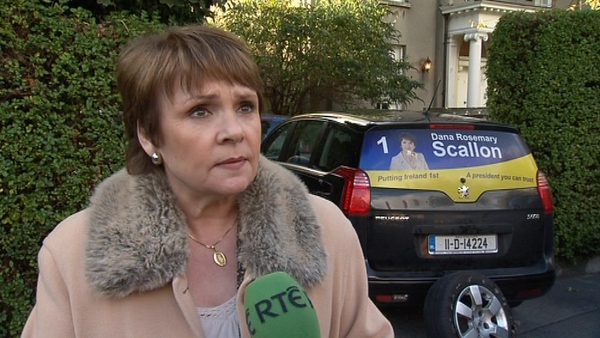