Presidential candidate Dana Rosemary Scallon has told RTÉ News that gardaí in Carrick-On-Shannon have been notified about possible tampering with the rear wheel of her campaign car.

The tyre blew last night as she and three others were returning to Dublin from Co Leitrim.

The tyre blew out near Kilcock, causing the car to swerve from the outside lane to the hard shoulder, narrowly missing a truck.

On examination it had more than 12 abrasions and holes in the tyre wall.

Dana said they had the tyre examined in Dublin this morning. They were told that it could have been deliberately cut, but it is not possible to say as the damage is so bad.

Gardaí confirmed they received a report of alleged criminal damage that is now under investigation.

Dana cancelled her engagements in counties Wicklow and Wexford for today as a result of the incident.

Higgins would only serve one term

Meanwhile Labour Presidential candidate Michael D Higgins has said he has always operated with what he called 'extraordinary energy' particularly in his human rights missions abroad.

Asked on RTÉ's Six One News about his age, Mr Higgins said he would only serve one term.

He said he had always been on the cusp of change and was opposed to conservatism where it has stopped people acting in their best interests.

Mr Higgins said he was against a return to the values of the Celtic Tiger and the country needed to be inclusive at home and to restore the reputation of Ireland abroad.

Asked who would be his first guests at the Áras, Mr Higgins said that if elected, he would invite the other six candidates and ask them to talk about the best moments of the campaign.

Earlier Seán Gallagher said attacks against him in last night's TG4 debate will not deflect him from his presidential campaign message.

Mr Gallagher, who has topped the most recent Red C opinion poll, was the focus of a number of attacks during the debate over his experience and Fianna Fáil background.

He was criticised roundly when he supported changing the national anthem to make it less militaristic. Martin McGuinness referred to him as a “revisionist”.

David Norris said Mr Gallagher should have done more about unemployment when he was a member of the Fianna Fáil National Executive and Michael D Higgins said the Independent candidate stood for a "speculative economy".

“I don’t consider them attacks,” Mr Gallagher said. “Everybody is trying to get their point across as it gets a little closer to election day.

“But I’m going to continue to do what I’ve done and that’s not focus on any negative campaigning.”

Mary Davis rejected the idea that only Mr Gallagher and Mr Higgins could now win the election.

“It is not a two-horse race. There are seven candidates in this race and certainly me as one of the candidates is fighting right up to the bitter end, as are all of my supporters.”

Gay Mitchell agreed and said that everything was still to play for.

“People didn’t make up their minds in the last General Election until the last week,” Mr Mitchell said.

Mr Norris visited the camp at ‘Occupy Dame Street’ in Dublin where he came under some pressure from protesters.

Earlier, he appeared on Morning Ireland where he said his record of opposing bills in the Seanad proved he was the most Independent of the candidates.

Meanwhile, Mr McGuinness accused the “establishment party candidates” of hypocrisy over the issue of jobs.

"During the campaign a number of the establishment party candidates have pledged to use the presidency to create jobs, despite their parties - Fianna Fáil, Fine Gael and Labour - presiding over ever increasing dole queues and mass emigration,” he said.

“I have laid out for the people my record in job creation and the work I would envisage undertaking as president in order to bring jobs to Ireland and support Irish industry at home. Others should do the same." 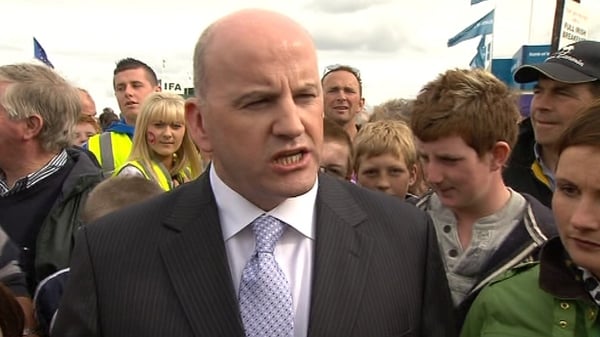