Severe crosswinds at Dublin Airport have resulted in a number of flights being cancelled or diverted to Belfast and Shannon airports.

Five flights were cancelled and 14 planes were diverted due to severe crosswinds right across the airfield.

Winds gusted up to 54 knots at times.

An American Airlines flight inbound from Chicago was diverted to London.

Met Éireann said this kind of weather is not particularly unusual for this time of year.

The forcast is for "extremely windy, blustery and very wet weather" with gust of up to 100 km/h likely in many areas.

Elsewhere, motorists in the north and northwest are being advised to drive with caution as sleet, snow and heavy rain are making conditions hazardous.

AA Roadwatch say motorists are advised to take care in Do Donegal tonight on all routes around Dryarch in Letterkenny due to flooding.

They say care is also required on roads around Navenney in Ballybofey where flooding has been reported. The Glen Rd between Glenties and Ballybofey is reported to be impassable due to flooding.

In Mayo the Newport/Glenhest Road is flooded . And in County Fermanagh The A4 has reopend at Belcoo just north of Blacklion following earlier flooding.

The UK Met Office has warned of the possibility of further flash flooding in Northern Ireland with heavy rain and strong winds. 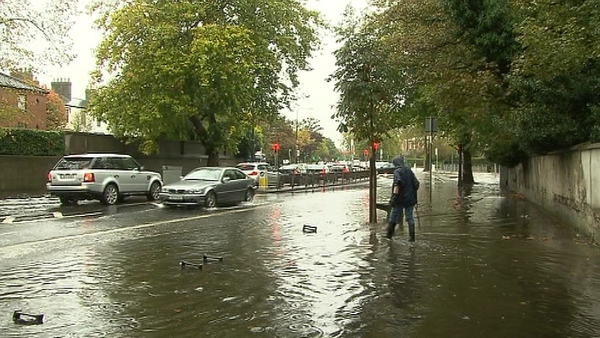