Mobile network O2 has confirmed that heavy rain in the Dublin region caused disruption to mobile services this afternoon.

O2 says many customers experienced "patchy service" and in some cases no service at all.

There were "coverage issues" reported in Carlow, Clare, Cork, Dublin, Kerry and Wicklow.

Heavy downpours also resulted in spot flooding on roads around the capital city, but most roads remained passable.

DART services were disrupted for a time this morning due to flooding south of Dún Laoghaire.

There are no reports of significant disruption outside Dublin.

Met Éireann forecast further spells of heavy and persistent rain in eastern and southern parts tonight, with a continuing risk of localised flooding.

As many parts of Ireland experienced heavy rain, temperatures soared to 30C in parts of the UK - making it the hottest day ever recorded in October.

MeteoGroup, the weather division of the Press Association, said RAF Finningley in Yorkshire recorded a sweltering 30C at 3pm.

The previous UK October record of 29.4C was set in Cambridgeshire in 1985.

Confused plants have been flowering in the unseasonably warm weather.

The Royal Horticultural Society said strawberries and rhododendrons were among the plants seen blooming at its flagship garden in Surrey - they were not expected to flower again until next spring. 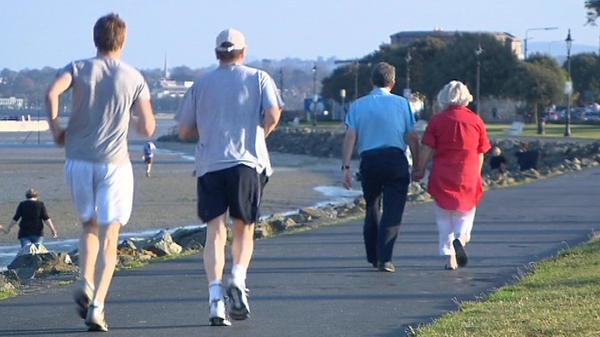