The 45-minute meeting took place ahead of a summit of EU leaders on Sunday week.

Speaking afterwards, Mr Kenny said he told Mr Barroso that Ireland could be an example to other countries in financial crisis, as the European leaders try to solve the eurozone debt crisis.

Mr Kenny said Ireland was heading in the right direction and the international commentary had recognised the return to growth and fiscal stability as a result of the implementation of the EU/IMF bailout programme.

The Taoiseach said he will be hopeful that Ireland can be the first of the programme countries to emerge from the EU/IMF loan plan.

Mr Kenny said the growing confidence in the country, as well as how to handle the Greek situaton and the re-capitalisation of the banks, was also discussed.

Yesterday, Mr Barroso set out what he described as a road map to solving the debt crisis, which comprised a recapitalisation of European banks, better and swifter measures to enhance economic growth and tougher surveillance of national budgets to ensure member states abided by fiscal deficit rules.

Meanwhile, Minister for Communications, Energy & Natural Resources Pat Rabbitte has said he sincerely hopes that the next ten days will result in a resolution of the eurozone debt crisis.

Speaking ahead of next week's meeting of EU leaders, Mr Rabbitte said there had been "drift" over recent months and it was in all our interests that a solution be found.

The minister said he did not believe there were dangers for Ireland in a possible large write-down of Greek debt, as we are in a different EU-IMF programme and we are fully complying.

Mr Rabbitte said Ireland could benefit from some of the possible solutions, citing examples as an EU "stability bond" or access to the expanded bailout fund.

On the possibility of a new EU referendum, Mr Rabbitte said such is the cataclysmic nature of the crisis, countries were going to have to consider options not thought of before.

However, he said Ireland would "make haste slowly", adding that "down the road it depends on what the solutions being proposed are".

Meanwhile, European Financial Stability Facility has announced that it will issue a €3bn benchmark bond for Ireland before the end of the year.

The chief executive of the EFSF, Klaus Regling, described Ireland as a success story and said the country should be able to return to the bond markets in 2013.

Mr Regling was speaking at a press conference in Lisbon this evening. 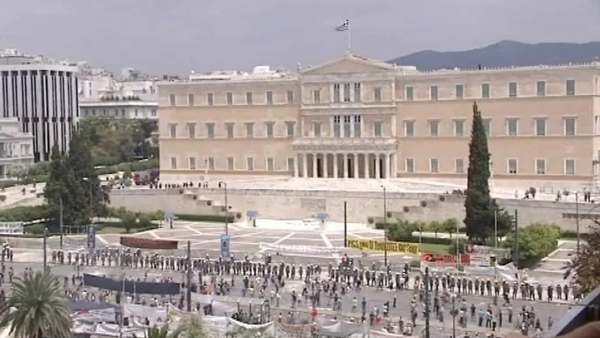