Talk of a possible Greek default gained pace while a pledge by the world's major economies to prevent Europe's debt crisis from undermining banks and the global economy failed to lift financial markets for long.

Greek Finance Minister Evangelos Venizelos was quoted by two newspapers as saying an orderly default with a 50% haircut for bondholders was one of three possible scenarios for resolving the heavily indebted eurozone nation's fiscal woes.

Officials played down the reports and Mr Venizelos described them in a statement as an unhelpful distraction from the central task of sticking to Greece's EU/IMF bailout programme.

European Central Bank governing council member Klaas Knot told a Dutch daily a Greek default could no longer be ruled out, the first ECB policymaker to speak openly of the prospect.

"It is one of the scenarios," Dutch daily Het Financieele Dagblad quoted him as saying.

"All efforts are aimed at preventing this, but I am now less certain in excluding a bankruptcy than I was a few months ago," Mr Knot said, adding that he wondered "whether the Greeks realise how serious the situation is".

More signs emerged today that European governments are working on recapitalising vulnerable banks, with France's top market regulator saying 15 to 20 banks needed extra capital, although no French ones "at this stage".

The International Monetary Fund reckons Europe's banks could need to recapitalise to the tune of €200bn and many bank analysts are far gloomier than the IMF.

The European Commission said European banks had already received €420bn in funds since 2008 and were in much better shape than three years ago.

European shares fell again, leaving them on course for a fifth straight month of losses.

A commitment from G20 finance ministers and central bankers to "take all necessary actions to preserve the stability of the banking system and financial markets as required" failed to placate investors.

A statement issued after G20 talks in Washington said the 17-nation eurozone would implement "actions to increase the flexibility of the EFSF and to maximise its impact" by mid-October.

But it left unclear whether they would go beyond an already agreed widening of the eurozone bailout fund's powers, which has so far failed to reassure. 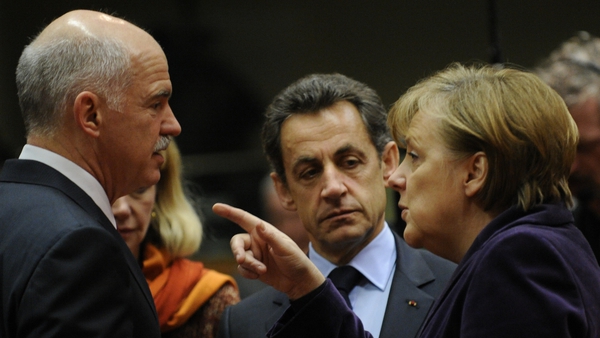