Fine Gael's Presidential candidate Gay Mitchell has said the entry of Martin McGuinness into the race "raises very real questions" for the people to decide on.

Mr Mitchell told RTÉ News that he had spent his life defending the State and he was not about to surrender it to people who will change it from the inside.

He said the President was not just the Commander-in-Chief of the Defence Forces, he also, according to the Defence Acts, "oversaw" their operation.

Mr Mitchell said Mr McGuinness had opposed the existence of this State.

The remarks come on the back of comments from Minister for Justice, Equality and Defence Alan Shatter, who said he did not believe Mr McGuinness would be an appropriate person to be Ireland's next President.

Responding to Minister Shatter's comments, Sinn Féin vice president Mary Lou McDonald TD said it was up to the people to decide who was an appropriate candidate for the Presidency.

She said Mr McGuinness was a strong candidate, which explained the attacks on him by the likes of Minister Shatter.

Meanwhile, both Dana Rosemary Scallon's and Senator David Norris' chances of getting on the Presidential ballot paper received a boost as more councils agreed to consider their respective nominations.

The Mayor of Co Cork, Fine Gael Councillor Tim Lombard, has called a special meeting of the council there, where it will consider a motion to nominate Senator Norris for the Presidency.

The meeting will take place on Tuesday at 11am with the motion the only item on the agenda.

Dublin City Council will also meet on Tuesday to consider Senator Norris' nomination, while councils in Laois and South Dublin will do the same on Monday.

It is considered likely that those two councils, along with Longford and Donegal, will back Ms Scallon, giving her the four nominations she requires.

Her nomination is also on the agenda, along with Senator Norris, in Carlow and Roscommon on Monday, Waterford City on Tuesday and in Kilkenny on Wednesday morning.

Separately, TDs Shane Ross and Mattie McGrath have yet to declare whether they will support Mr Norris' nomination.

Senator Norris has secured the backing of 17 of the required 20 Oireachtas members to become an official candidate for the Presidency.

Mr Ross said he would be making his views known after consulting supporters in Dublin South.

Speaking on RTÉ Radio's Morning Ireland, Mr McGrath said he had not made a final decision but would not like to stand in the way of democracy.

Elsewhere, an opinion poll suggests that Senator Norris could be in the lead in the race for the Presidency, with Mr McGuinness in third place.

The poll was carried out over the last few days by Millward Brown Lansdowne, with a smaller than usual sample size of 500, and was conducted online.

The company says the sample was weighted to accurately reflect the demographic break-down of the population at large, and that the margin of error is plus or minus 4%, as against 3% in most polls with a sample of 1,000.

It found support for David Norris at 27%, followed by Michael D Higgins on 18%. 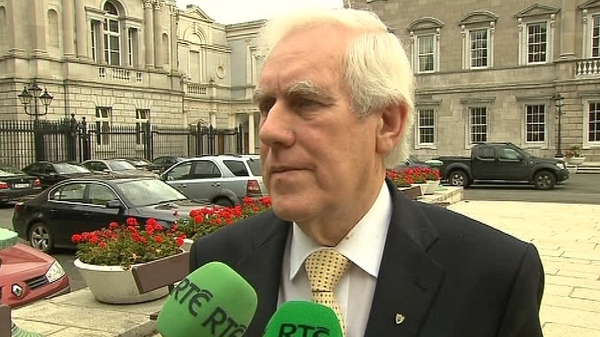 Fianna Fáil will not back Áras candidate