Fianna Fáil will not be supporting any candidate in the forthcoming Presidential election.

The decision was made by the parliamentary party at a meeting in Leinster House after a motion was put forward by party leader Micheál Martin and seconded by deputy leader Éamon Ó Cuív.

The issue had been raised by Senator Labhrás Ó Murchú, who asked colleagues for their backing to run as an Independent. This led to a fraught and divisive meeting last Thursday which pitted Mr Martin against Mr Ó Cuív.

Mr Martin was opposed to the idea and in advance of today's meeting it seemed certain that he had the backing of a majority of the parliamentary party.

Arriving for the meeting, Cork North Central TD Billy Kelleher said he believed the party should stay out of the election.

He said the party had decided not to nominate a candidate, and he did not believe members should be allowed to decide individually who to back.

He said things had become "hot and heavy" at last Thursday's meeting.

Asked about Mr Ó Cuív's position, Deputy Dooley said he believed he would continue to play an important role in the party and remain in the position of Deputy Leader.

Earlier, Carlow Kilkenny TD John McGuinness said he was in favour of the party facilitating a candidate.

Speaking on RTÉ’s Morning Ireland, he said: “I did agree with facilitating the nomination of Gay Byrne, and in line with that view, I would like to look at the possibility of nominating others.

“We are a big block of votes that can facilitate a nomination, and I believe we should.”

This morning it became clear that opinion in the party was supportive of the leader's position.

That reality was recognised by Senator Ó Murchú, who announced before the meeting that he was withdrawing his name from consideration.

In a statement, Senator Ó Murchú said he would not continue to seek nominations from individual Fianna Fáil members.

“In the absence of such nominations, I could not achieve the 20 nominations required,” he said.

The Fianna Fáil ban on backing Independents is likely to make it impossible for David Norris or Dana Rosemary Scallon to get on the ballot paper either.

In Athy, Co Kildare, all of the nominated candidates are attending the National Ploughing Championships.

The Labour party candidate said Sinn Féin's Martin McGuinness is fully entitled to contest the election because of the support he has received from his party and the independent TDs in Dáil Éireann.

Mr Higgins said he looks forward to debating the issues with the other candidates after the closure of nominations.

Fine Gael candidate Gay Mitchell said Mr McGuinness sounds like he has been with the United Nations on peacekeeping duty but he was looking forward to debating the issues with him in a live Presidential television debate.

Mr Mitchell said he was ready and prepared to debate the issues with Mr McGuinness and all the other candidates.

"Bring it on," he told reporters.

Independent candidate Sean Gallagher said it is time for the candidates in the election to debate the issues that are of importance to the country.

Mr Gallagher said he had received a tremendous reaction from the public and welcomed the arrival of additional candidates in the election.

He said if he is elected he would be happy to accept whatever salary the Government felt was appropriate for the President.

Sinn Féin's Mr McGuinness said the only people talking about his past in the IRA were the media.

Mr McGuinness said he has received a very positive response from the public since he was nominated by his party and he was satisfied that while the media continued to ask about his past the public wanted to talk about the future.

Meanwhile, Mary McAleese has said she will be sad to step down as President after 14 years.

Mrs McAleese said she is going to miss the job terribly, particularly the engagement with people.

She wished all the candidates in the race to succeed her the best of luck.

Dana Rosemary Scallon has no prospect of being nominated for the Presidency, while Senator David Norris will struggle to secure the 20 signatures necessary.

At present, Ms Scallon has just one possible supporter, while Senator Norris has ten.

Denis Naughten, Noel Grealish and Senator Jillian van Turnhout say they will not nominate anyone, while Michael Lowry says he is "unlikely" to do so.

Mattie McGrath said he might nominate Dana, or else make no nomination.

Deputy Shane Ross, and Senators Mary Ann O'Brien and Fiach MacConghail say they are undecided, while Katherine Zappone had no comment. 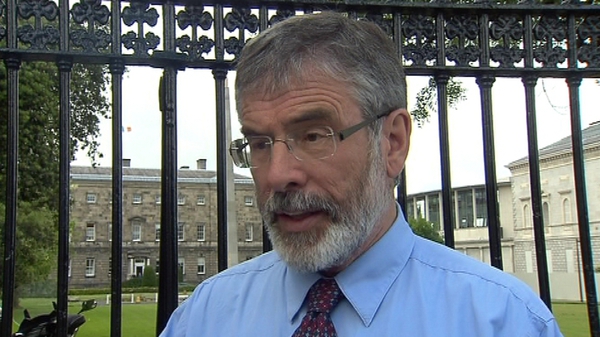